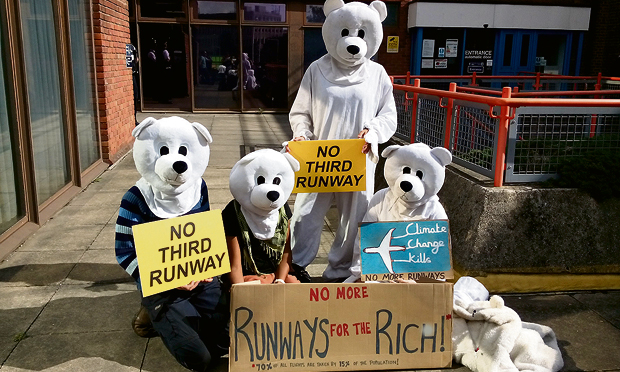 Sheila Menon, 44, of Pellerin Road, and Graham Thompson, 42, of Durlston Road were today sentenced to six weeks suspended for 12 months, meaning they will not have to go prison unless they break the conditions of their sentence.

The two demonstrators, along with 11 other members of the campaign group Plane Stupid, staged a protest at the UK’s largest airport on 13 July last year.

All of the activists, dubbed the ‘Heathrow 13’, were found guilty in January of aggravated trespass and entering a security-restricted area of an aerodrome.

Sentencing them today at Willesden Magistrate’s Court, Wright said: “It was very clear your stated intention was to cause as much disruption as possible. You have achieved your aim.”

She said she recognised the defendants’ good character and commitment. However, she said: “The fact that you are principled and have strong views about public interest doesn’t mean you can break the law”.

← Could ‘fat activism’ hold the solution to the obesity crisis?Row breaks out on Twitter after police ‘blame’ injured cyclist for #NoHelmet →