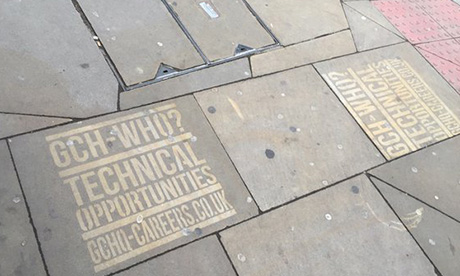 The security agency GCHQ launched a recruitment drive this month for new talent in the heart of London’s Tech City, renowned for its tech-savvy workers.

James Cook, technology editor at Business Insider Europe, took a photograph on Great Eastern Street of some of the adverts:

There are GCHQ recruitment ads all over Shoreditch pic.twitter.com/auku5a1rGe — James Cook (@JamesLiamCook) November 10, 2015

The spy agency told the Hackney Citizen the council approved its graffiti campaign back in June.

“GCHQ can confirm that permission was granted by Hackney Borough Council for the clean graffiti campaign,” a spokesperson for the security organisation said.

The council’s graffiti policy demands “express permission” be obtained prior to any painting or marking on its property, including footways.

But the council denies having received a request for the campaign from either GCHQ or any agency acting on its behalf.

“They did not apply for advertising consent to do this,” said a Town Hall spokesperson.

“Neither environmental enforcement, communications nor regeneration and planning – no one in the council was asked for permission.”

The council said it would look to fine the responsible party should it find them in breach of its graffiti policy.

A Town Hall spokesperson said: “If we get evidence that any of these adverts are definitely in Hackney we will take enforcement action, which can include forcing the company to clean it up and fining them.

“This is something we have done in the past and will continue to do.”