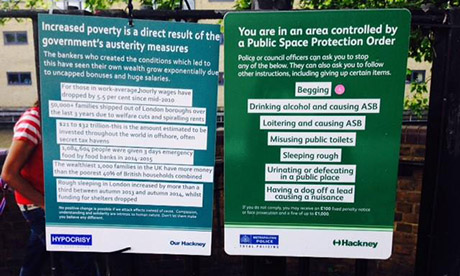 The Council announced today that ‘rough sleepers’ are being removed from the PSPO so that it more clearly reflects the anti-social behaviour the Order is targeting and the course of action that could be taken.

The climb-down comes after over 80,000 people signed a petition against the inclusion of rough sleeping in the new order designed to clampdown on ‘anti-social activities’ in the borough’s hotspots.

In a statement Deputy Mayor Sophie Linden said: “People were understandably concerned by inaccurate headlines, despite the Council making it clear that this Order was not about targeting homeless people.

“Nor was it the Council’s response to homelessness. Anyone sleeping rough in Hackney is always offered a bed and the support and help they need. The Order was never intended to punish people who have fallen on hard times, been evicted and found themselves without a roof over their heads.”

London Fields resident Guy Aitchison told the Hackney Citizen: “This removes the most objectionable part of the PSPO, but begging, drinking and other victimless activities are still included.

“Police and council officers will still have wide arbitrary powers to coerce the homeless and anyone else they deem a nuisance.”

Following the announcement, campaign groups Digs and Reclaim Hackney, a new organisation formed to “fight gentrification in the borough” said they would still be fighting for the rest of the order to be overturned.

A spokesperson said: “We’re glad Hackney council has seen the error of their ways in trying to apply this order to criminalise rough sleepers. But this isn’t good enough. We oppose the use of financial and legal punishments to force vulnerable people into unsuitable treatment.

“It shouldn’t have had to take 80,000 people signing a petition, and the threat of direct action and protests to make Hackney Council treat rough sleepers with a little human dignity.”

Digs and Reclaim Hackney are organising a protest against the PSPO outside Hackney Town Hall on 22 June.