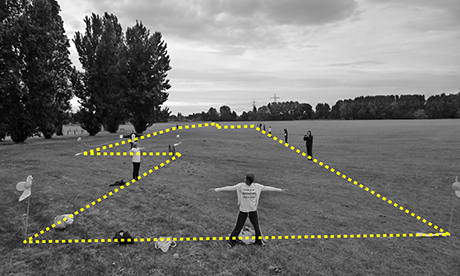 Campaigners demonstrate the footprint of the proposed pavilion on the Marshes. Photograph: Save Lea Marshes

The Council’s proposals to build a sports pavilion on the Hackney Marshes were approved by its own sub-committee last night, ahead of a public inquiry on the same plans later this month.

The new facilities next to North Marsh by Cow Bridge would comprise of 16 changing rooms for football and cricket teams and a car park with space for 68 cars, 5 minibuses and 5 coaches. Another car park with 62 parking spaces is planned for East Marsh.

The new pavilion involves building on Open Metropolitan Land, meaning the plans still have to be approved by the government’s Planning Inspectorate (PINS) in a public inquiry later this month.

Representatives from objectors Save Lea Marshes (SLM) were present at the packed sub-committee meeting, alongside cricket club members who support the proposals.

During his speech in support of the council’s designs, Cllr Jonathan McShane, Cabinet Member for Health, Social Care and Culture said the Marshes’ primary use was sport.

But Save Lea Marshes member Caroline Day, said: “Their view that the ‘primary purpose’ of the marshes is for it to be utilised as a sporting ‘facility’ unfairly disadvantages local people enjoying the marshes freely for a range of pastimes and its value for nature.”

Ms Day said that while no one could “reasonably dispute” the need to improve the sports facilities, the plans would “unnecessarily destroy green space”.

“The council’s agenda is to commercialise our green spaces with large private facilities in the name of health and sport.” 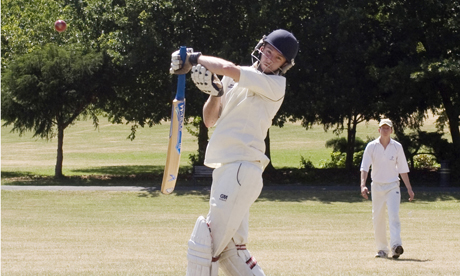 Jonathan Bannister from Stoke Newington Cricket Club spoke in favour of the application at the meeting. He told the Hackney Citizen he was “delighted” it had been approved.

“It will help bring many more children from Hackney and elsewhere in East London to a life of sport and help Stoke Newington Cricket Club build on their goal to become a centre of cricketing excellence”, he said.

“I appreciate that Save Lea Marshes, and the other groups opposing the plans, want to protect our green spaces for future generations, but the reality is that when the works are finally completed there will be a net gain in green space, more trees, a reduction in car parking and a facility fit for purpose. ”

Bannister said it was a “disgrace” that the plans will be heard at a public inquiry as it means yet further delays to the project.

Following the approval, Cllr McShane said: “This decision is great news, and brings us a crucial step closer to realising the full potential of the Marshes as a centre for sport and community activity, accessible to all.”

The sub-committee voted in favour of the approval 5 to 1. Councillor for Haggerston ward Barry Buitekant was the only vote against.

The planning inquiry will begin June 16.