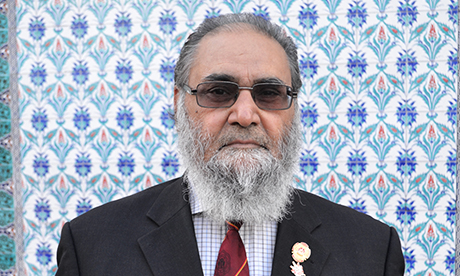 Whomsoever despairs at how parts of our planet are imploding from ethno-religious war, take heart from the words of Faizullah Khan.

This is not Blakean yearning. A devout Muslim and former Speaker of Hackney, Faizullah has been to the real, more troubled Jerusalem four times – twice “on business” as part of a Universal Peace Federation trip (Faizullah is officially a man of peace, holding ambassador status for the organisation) and twice on holiday with his wife.

The Hackney Citizen meets him in one of his favourite eateries, the Turkish Aziziye Restaurant inside the building that also houses Stoke Newington’s Aziziye Mosque. It is not that unusual to have a restaurant and a mosque under one roof, and it’s certainly convenient for when the Ramadan fast ends.

The building used to be a cinema, and until the floor of the mosque was finally evened out, worshipers rising from their prostrations ran the risk of falling over due to a precipitous slope.

Round the front is a shop and the restaurant, frequented mostly by families and couples sitting discreetly in enclosed booths strangely reminiscent of train vestibules.

The vegetable stew is so good I could take a bath in it, and the indulgent baklava melts in the mouth.

Karachi-born Faizullah, 76, is full of praise for Turkish people and their cuisine: “We in Islam say that cleanliness is half the faith, but when it comes to Turkish people, they are, I don’t mind saying, the cleanest of the Muslims. Their houses are always spotless. The mosque, the way they decorate it, is exceptional. And when it comes to their food, it is excellent cuisine and nicely presented.”

He says: “I remember when I first moved to Hackney in 1986, people said ‘Oh, Hackney,’ in a mildly disapproving tone. This ‘Oh’ factor continued – but now the ‘Oh’ has become ‘Wow’.”

After his career as a school teacher he was a Labour councillor for Hackney Downs ward until he stood down after being diagnosed with cancer in 2009.

“My lymph nodes were behaving naughtily,” he says. “The situation deteriorated so fast I had to virtually run to hospital. They told me, ‘Your cancer is very advanced, and given your advanced years, normally we wouldn’t treat it. But looking at your health in other respects, there is a fighting chance you will survive.’ I said, ‘Then I will go down fighting.’”

Five years on, he is still here, and his pace has not slackened – if anything, he has redoubled his efforts to try and get the most out of every day. He remains involved in numerous community groups, is a school governor and is visibly proud of having worn the livery of the borough during his year as Speaker. These days, he also writes poetry, much of it extolling the virtues of peace.

“The situation in the Middle East is very bad,” he says, adding that there have been times in the past when cohesion between faith groups in the borough has come under strain because of events abroad.

But he adds: “Hackney really is like Jerusalem. There are synagogues, mosques and churches next to each other. When I was Speaker and I visited all sorts of events, I always used to say that. I wanted to ram home the point. I am very much concerned about the situation in the Middle East, but I always thank God that we are living in a peaceful atmosphere.”

← I don’t have an uncle who works in media… so is a creative career out of the question?Wave Caps: Former hack turns poet →