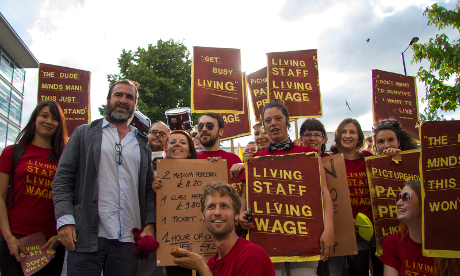 Cinema staff striking over pay moved their picket line from the iconic Ritzy theatre in Brixton to Hackney Picturehouse on Saturday and received a show of support from footballing superstar and actor Eric Cantona.

The Ritzy Living Wage campaign is calling on the Picturehouse cinema chain – owned by screen giant Cineworld – to up staff wages from £7.24 per hour to the London Living Wage (LLW) of £8.80 per hour.

Carrying placards and with a samba band in tow, a group of around 30 protesters created a “carnival atmosphere” outside the Mare Street cinema.

Former Manchester United player ‘King’ Eric Cantona, in Hackney for a Q&A session on his new documentary for Amnesty International’s football film festival, was drawn outside by the sound of his old club’s famous chant “Ooh Ah Cantona”.

Cantona posed for photographs and accepted the gift of an extra-large T-shirt from the protestors, emblazoned with the slogan “Living Staff, Living Wage.” 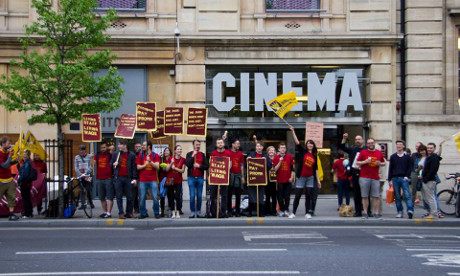 Saturday’s strike was the sixth to be staged in the ongoing dispute by workers at the unionised Ritzy cinema. Talks broke down between management and BECTU (the media and entertainment union) last week, prompting the union to call for a national boycott of Picturehouse cinemas.

Ritzy union representative Rob Lugg told the Hackney Citizen that implementing the London Living Wage is “fundamentally important”, especially for a company that host events by organisations such as Amnesty International.

‘The Picturehouse’s identity is built on being left-field and progressive. They show independent films, they sell fair-trade coffee yet they are keeping their staff below the poverty line. It is about asking whether their image is all just marketing. Is it a smokescreen or is it real?”

“We have always tried to be a fair employer and pay fair rates; we are one of the highest paying employers in Brixton and in the cinema industry.  We are completely sympathetic to the difficulties of living in London with the ongoing property and cost of living crisis.

“However, we cannot predict the future levels of the London Living Wage and we cannot build a business plan around a rate that is not within our ability to forecast.”

“We held a special event to mark the release of Looking for Rio [Cantona’s documentary] and invited Eric Cantona to attend. A demonstration was held outside the cinema by The Ritzy Living Wage campaigners and Eric Cantona was photographed with them.”

“BECTU is calling on trade unionists across the UK to boycott Picturehouse cinemas with the aim of persuading them to return to negotiations. Their move to impose a small pay percentage increase has infuriated staff and shows the total lack of respect that the company has towards their staff.”

The London Living Wage, which is set independently and updated annually, recommends businesses to pay London workers £8.80 per hour and is calculated according to the basic cost of living in the capital.