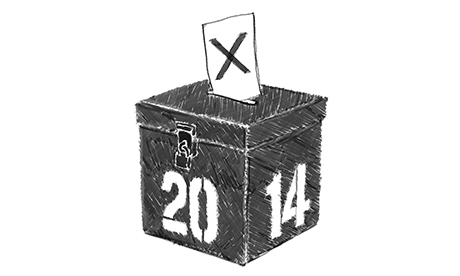 Choose who runs Hackney: vote on 22 May. Image: Hackney Citizen

Political animals, rejoice! Residents will go to the polls next month when there will be not one, not two, but a trio of elections in our borough on the same day – 22 May.

That’s right, while in many parts of the UK residents will have two ballots to cast – one for the elections to decide the political make-up of their local Town Hall, another to elect Members of the European Parliament (MEPs) – in Hackney the electorate will also be asked to decide who should fill the post of Mayor
of Hackney.

Hackney is unusual in having a directly-elected Mayor. Just three other London boroughs – Newham, Lewisham and Tower Hamlets – have adopted this system. Incumbent Mayor Jules Pipe (Labour), is standing for a fourth term and will compete against Conservative challenger Linda Kelly, the Liberal Democrats’ Simon de Deney and the Greens’ Mischa Borris as well as independent candidate Mustafa Korel.

The elections for the European Parliament, meanwhile, are held in a London-wide constituency. The capital currently has eight MEPs – three Conservatives, two Labour, one Lib Dem, one Green and one UKIP.

Hackney is unusual in having a directly-elected Mayor

At present, Labour holds 86 per cent of the seats on Hackney Council. However, 18 incumbent Labour councillors are standing down at this election, meaning there could be an influx of new blood in ‘safe’
Labour seats.

The Conservatives – the largest opposition party, with five seats on the council – have strongholds in the north of the borough, where Labour will be looking to make inroads.

Interesting aside: Linda Kelly, who used to be a Labour councillor but swapped sides and joined the Tories three years ago, is to stand for election again in Leabridge ward, where Labour has in the past polled well. When Cllr Kelly crossed the floor in 2011 she was pilloried by Labour supporters who predicted she would try instead to get elected in a ward where the Tory vote is stronger.

The Liberal Democrats hold three seats on Hackney Council, and all the party’s incumbent councillors represent Cazenove ward, which has long been Hackney’s hottest marginal and is set to be so again this time around with both Labour and the Lib Dems slogging it out here. Clissold ward is another to watch as it is here that the Greens are said to stand the strongest chance of gaining seats – though new ward boundaries mean increased uncertainty all round. Clissold is currently Labour-held. The ward is also being fought for by the Lib Dems, meaning it will be a
three-cornered fight.

While some will enjoy the election fever, for others it will be more a case of election fatigue.

Either way,  even those bored stiff by local politics will not have failed to notice the surfeit of political leaflets finding their way through residents’ letterboxes.

The Hackney Citizen is looking to hold local politicians from all parties to account by examining the accuracy of claims they make in their election literature. If you receive a leaflet you would like to have fact-checked, simply post it to us at:

Alternatively you can send a scan of it to office@hackneycitizen.co.uk

The Hackney Citizen is providing local residents with a chance to put their questions to those standing for the borough’s top political post.

We are hosting a free Question Time-style mayoral candidate hustings from 4pm-6pm on Sunday 27 April at the Arcola Theatre in  Ashwin Street, Dalston, E8. The event will be a chance for residents to quiz those standing for Mayor on topics that matter to the local community.

Representatives from all parties fielding candidates in the Mayoral election will be there. We invite residents to send their questions for the candidates to office@hackneycitizen.co.uk.

To reserve your place at the hustings, email office@hackneycitizen.co.uk