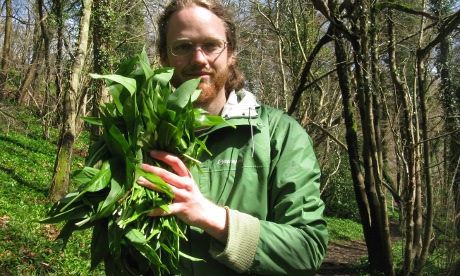 With 56 parks and gardens, Hackney is the London borough with the largest expanse of green space.

But next time you’re strolling through Victoria Park or Hackney Marshes, instead of taking a deep breath to smell the autumnal leaves, why not take a closer look at what you could eat?

Keen forager and herbal medicine student Jason Irving says there are plenty of edible shrubs, leaves, berries and fungi to be found in and around East London.

“You’ll not only find things growing wildly, but there are also plants put there by the council such as rowan berries which are poisonous raw but can be made into a jelly and are great with meat.

“Hawthorn berries are also commonly planted and you can find them in most parks and can be brewed into a tea or used as a traditional medicine.”

Since moving to London two years ago, Jason started his own walks, talks and workshops to teach people how to identify and use wild plants.

This year he has led walks around Hackney Downs, Abney Park cemetery and conducted a foraging community class with local food kitchen, Made In Hackney. But the love for foraging has been with him long before the move to the big smoke.

“They are unpredictable with more unknown varieties. You only get to see them for a few days and then they’re gone.  It’s hard to get to know them well.”

Having enjoyed walks in the woods and reading up around the topic, Jason began working for his uncle, a famous forager in foraging circles and the biggest supplier of wild foods to restaurants which included clients such as The Ivy and St John Bread and Wine.

And whether the use of foraged produce in restaurants began with local ingredient demand, a prominence of environmental awareness or the nostalgia that comes with eating a dandelion that you could have picked yourself, Jason says it all kicked off about five years ago with chefs becoming more interested in using wild foods which happened to be when he started taking foraging seriously.

But it’s not only top chefs and restaurants that have got on board with the grass and roots; foraging has become prevalent on a residential level too.

Jason says that people get into foraging for different reasons and in urban areas, it has nothing to do with eating to live.

“There’s a lot of interest in the survival thing, in bush craft.  Then there’s those who are into food in general; cooking and making their own stuff whilst some like the traditional herbal-health and medicine aspect.”

With recent reports of ‘foraging gangs’ stripping Ashdown forest of the finest mushroom crop it has had in years to sell on the black market, it’s important to not only follow the legal guidelines but also be ethical with it.

There is yet to be an official foraging code of conduct but Jason says it is all about common sense.

“Don’t take more than you need and be aware of what plants you’re picking and what part of the plant you’re taking.

“Plants have evolved for grazing; taking the leaves is just like cutting the grass.  Take care when picking seeds and fruits as it’s what the plants use to reproduce. If you take them all, it won’t happen.”

Areas like Abney Park in Stoke Newington are protected, which means that foraging is strictly prohibited and Jason says that some parks may not be keen to see people picking their plants.

However, there’s no law against foraging for personal use and Hackney council have yet to set any guidelines.  The good news is it’s definitely not theft.

It’s also important to not go too wild when eating mushrooms as there are many edible types that look similar to the poisonous ones.  Make sure you don’t put any unknown plants in your mouth or eat something you are not sure of.

But Jason says there’s only so much you can read up about foraging before you have to take it outside.

“Foraging is something that needs to be learnt by doing.  It’s far more useful to get out there and see and smell things and learn that way”.

And at this time of year, there’s a field of things to see in Hackney.

You’ll find a flourish of greenery along the canal, nettles and berries in Victoria Park, cow parsley and deadly nightshade in Abney cemetery – a plant used in 19th century Italy by women to dilute their pupils and make them appear all the more seductive.

Aside from accidentally eating something poisonous, Jason does warn about a current contamination in Hackney Marsh – the giant hogweed.

An invasive species, the hogweed may cause those who touch it to become photosensitive resulting in blisters and burning skin when exposed to the light.

For more information about Jason and his walks see his website.