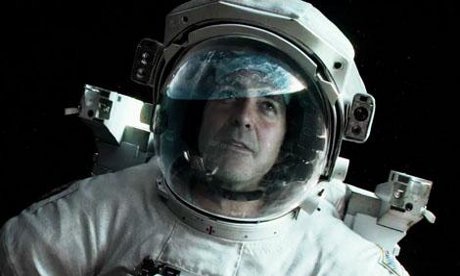 For a brief moment, amidst an intensely sentimental Sandra Bullock monologue, I considered going against the grain and describing Gravity as something less than awesome. But despite a greasy Hollywood sheen and a sharp whiff of cheese, awesome is about right.

One of those rare features that strikes an impressive balance between uncompromising mainstream entertainment and serious cinematic muscle, Alfonso Cuaron’s provocative and nightmarish space-based thriller offers much to admire.

In what’s a relentlessly nerve-wracking and visually hypnotic feature, Bullock and Clooney play a pair of astronauts working on a telescope a few hundred miles above earth. The setting is a familiar one for all sorts of sci-fi and contemporary disaster movies, but this multi-layered, distinct thriller has a little more to it than most.

A striking opening scene instantly suggests something of Kubrick’s 2001: A Space Odyssey: an awe-inspiring spacescape, in which Matt Kowalski (Clooney) and Ryan Stone (Bullock) float like foetuses about their work, indicates themes of conception and birth, while the infinite expanse of darkness looms like the ever-presence of death. There is also an overt and beautiful return to the womb scene.

While the film is complemented by some grandiose philosophical hints, on a more basic and satisfying level it is rapturously entertaining. When Ed Harris informs the astronauts of orbiting debris hurtling towards them at bullet-like speed, the result is some of the most gripping chaos cinema can offer.

Every twenty minutes or so, we observe Bullock clinging to some metallic lifeline with an eternity of space stretching beyond her desperate fingertips. It’s like Tom Cruise hanging from an inverted cliff edge multiplied by a million.

Bullock and Clooney work incredibly well together: the smooth and angel-like Kowalski watching over the cold, damaged Stone with warmth and wit is composed perfectly. Clooney does what he does best, delivering vintage cool and charm amidst deliriously high-tempo drama.

However, when Clooney is not on screen, Bullock’s shortcomings are exposed: her solitary dialogues pepper some key scenes with a frustrating vulgarity. If Cuaron had left a few more things unsaid we might be celebrating a nigh-on flawless masterpiece.

As it is it’s a fantastic film, but will it be the first port of comparison when another top-notch cinematic venture into the cosmos is released in 40 years time? I’d guess not.

Regardless, Gravity is an awesome viewing experience.