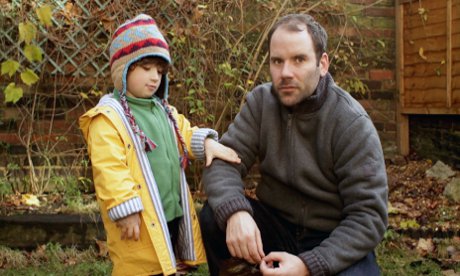 Between looking after his young son and getting employment pep talks from his wife’s smug boss Anton, Reighton  nds an escape route down in the labyrinth of Soho. But red-lit roads can only lead to trouble and after bumping into an old friend Ronnie (Martin Askew) in a strip-bar, Reighton is pulled into the dangerous underworld of back doors, parties and the inevitable violence that comes from fraternising with men called Bunny. After witnessing a murder, Reighton  nds himself at the mercy of of gangster king-ping Tommy Evans (Doug Allen), and whatever Tommy wants, Tommy gets.

Whilst the plot isn’t the most original, Nice Guy is far from the cheesy gangster films that lead one to believe every Cockney carries a gun and conducts dodgy deals in the back room of a lapdancing club. Rather, thanks to the low-budget film style, strong use of silence and the juxtaposition of family life with the sleaze of Soho, Nice Guy touches on the realism of the man-next-door faced with a dramatic series of events.

Clerkin’s portrayal of troubled and ego-battered ‘nice guy’ Reighton is authentic and has the audience rooting for him as he struggles to get himself out of the dangerous orbit he has found himself suspended in. His relationship with son Ray (Kiko-Ray Clerkin) contrasts delightfully with the nasty goings-on outside the home, however these two sides of Reighton’s life quickly merge. Ray is a fantastic toddler; his singing on the back of the bicycle and childish ramblings are genuinely heartwarming, although it would appear he is scared of quite a lot of things, including frogs and Daddy poking a fork in the toaster.

It’s anxious viewing, in part created through jerky camera use and anchored audio – long and tense silences mixed with hyper-real sounds, like the noise of spreading butter on dry toast.  is crime thriller leads you through the London winter – announced by Brechtian style chapters – and with powerful performances it pulls you into a journey with an underlying threat of danger and with no fire escapes.

← Rethinking the wardrobe for autumn and winterHackney gets its goat →