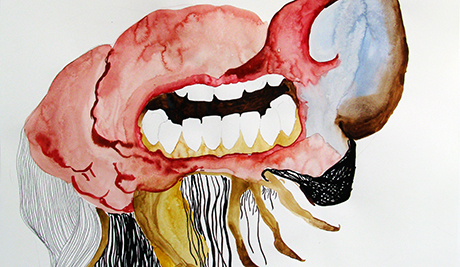 Four artists explore the uncanny, the unsaid and the organic process of being led by their practice in new exhibition Growth at the Karin Janssen Project Space, Well Street.

Artist and gallerist Karin Janssen said the idea for the exhibition came from her desire to work with the award-winning abstract painter Gemma Nelson.

“Looking at her work and mine, searching what exactly it was that we had in common, I found that our impulsive, organic way of working is what linked us together,” she says.

The practice of the artist is the central theme to Growth and the idea that not every mark put down is planned, rather it is the work that takes chances through the making process.

Janssen says: “In some works, the artist literally started in one corner and then saw where they would end up.”

The work is allowed to take over in Gemma Nelson’s obsessive, cell-like tapestries that appear to breed across the canvas, and in the vulnerable ‘creatures’ of Angela Smith which start with the pouring of paint which is then left to run.

Rachel Bullock’s charcoal drawings rise up like a flowing mountain of hair and fur coats  while Janssen, whose work here features a paintings of a screaming mouth, plays with abstraction and familiarity in her human body series, Silent Screams in The Valley of Uncanniness.

“Because these forms are linked to the human body, they suggest physical deformations, and since defects in the body indicate disease, we are reminded of something tumour-like, which instinctively repulses us,” she says.

“It’s a kind of repulsion-fascination of a car crash or a horror movie, you don’t want to look, but you can’t help yourself.”

Janssen, who has run the artist-led project space in a former hairdressers since 2011, says the changing and ever expanding nature of Hackney without a “big master plan” is not only reflected in Growth but also in the space.

“I use the gallery as my studio between shows, so I have a very close connection with the people in the street,” she adds.