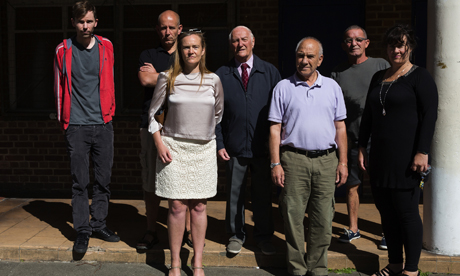 Morland Estate residents outside the Community Hall next to London Fields

Residents of an estate close to London Fields are furious at a bid by Hackney Council to sell to the highest bidder a patch of land that has been lying derelict and blocked off by hoardings for years.

Neither the Morland Estate residents nor the council want to see it standing empty.

But while the residents think allotments or bike parking spaces should be created there, the council hopes to raise cash from the sale at auction, which could pave the way for a private developer to fling up flats if planning permission were granted.

Morland Estate resident Julian Blake said: “We think the land could be put to better use than simply selling it off to developers.

“We need all the space we can get. There are lots of people cycling but they have nowhere to put their bikes.

“There’s so much that could be done with the site and so much energy, but the council is just ignoring us.”

Helen Mead, who lives next to the land, said she considered trying to buy it herself as a solution to the impasse.

She said: “I would have created a community garden.”

The plot, which is going under the hammer early this month with a starting price of £180,000, backs onto garages which Ms Mead says have been used by prostitutes and drug dealers and which have now been boarded up.

She said: “The council tried to sell it off in 2002 and it was blocked. They had consulted residents and we said we didn’t want them to sell it off, and I thought they would consult again.”

A Hackney Council spokesperson said: “At the cabinet meeting on 22 April it was agreed that the council would postpone marketing derelict land at 1a London Fields Westside for sale until after 5 August.

“This was to allow Ms Mead to put together her own offer to purchase the land as she had previously requested.”