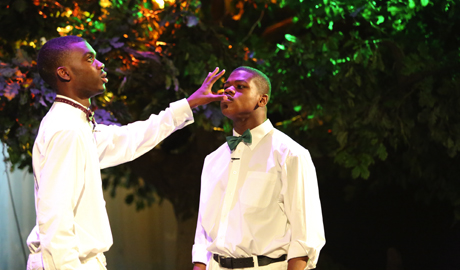 Matthew Alabi and Theo Garshong in a scene from the Bridge Academy production of A Midsummer Night’s Dream. Credit JP Smit

“The course of true love never did run smooth” goes the oft-quoted line from Shakespeare’s A Midsummer Night’s Dream – a truism never truer than in the world of teenage romance.

The first night was a raucous affair. Elfin gothic fairies serenaded the audience, a patois-speaking Thisbe almost stole the show in a pink curly wig, and the lovers sparred dressed in Kanye West-style white suits, all set to an eclectic soundtrack ranging from Ella Fitzgerald to Taylor Swift.

Director and drama teacher, Nastasha Coccia-Clark said she chose the famous Shakespearean play for her young actors because they can relate to the themes of love, magic and confusion.

Though the dialogue was initially intimidating, they tried to learn “how to put emphasis on the words and not just say it like a piece of poetry”, said Ms Coccia-Clark.

The hard work paid off, and the lovers were all acted brilliantly by sixth-formers, who had thoroughly ingested the nuances of the words. When Lysander (Matthew Alabi) told Hermia (Monique Hall) “I am sick when I look at you” with a ‘talk to the hand’ gesture, the audience shrieked. When he called her “you acorn” they roared.

Helena’s increasingly bedraggled distress at the heartache of unreciprocated love was done to comedic perfection in a strong performance from Chantal Gezi, and Hall was equally impressive as the feisty Hermia.

Helena’s sister Theresa Gezi, 12, a pupil in Year Seven at Bridge Academy helped her sibling to learn her lines.

She said:  “It was the best show. They had music that everyone knows and the lighting effects were really good.”

Special credit should also go to Ife Grillo, who managed to inject into the minor role of the authoritarian Egeus some serious attitude, eye-rolling and teeth sucking his way through his lines and turning the Shakespearean lord into a comic villain.

Though some students have A Midsummer Nights Dream as a set exam text, the play is extra-curricular and was rehearsed out of school hours.

Coccia-Clark said: “It is more than just acting. For a group of students to come from different year groups and different backgrounds and spend their time outside of classrooms to put something together that doesn’t amount to a qualification is hopeful and inspiring.”

The set was boldly designed, Titania’s boudoir was done up like a boutique hotel, complete with Chinese lanterns and an enormous and incredibly realistic tree woven with lights stood on stage throughout the play.

As the curtains closed on the energetic and impressive performance, Nat King Cole croons from the speakers: “They tried to tell us we’re too young, too young to really be in love.” His lyrics resonate not only with the characters in ‘A Midsummer Night’s Dream’, but with the cast and the young audience too.

As Ms Coccia-Clark remarks: “When it comes to overwhelming emotion, they absolutely get it.”