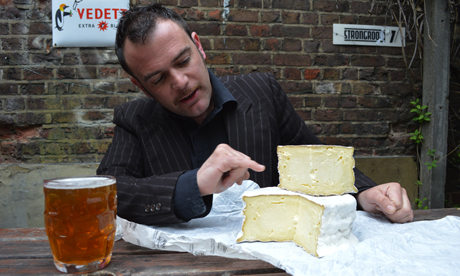 Sommelier Ned Palmer does what he does best. Photograph: Kathryn Bromwich

Cheese and wine pairings have always been a mainstay of social gatherings.

But with the unstoppable rise of micro-breweries – and now micro-dairies – matching cheese with beer is on the rise.

The second London Beer Festival (With Cheese) is in Shoreditch for five days featuring all-British products – including cheese made in London.

According to cheesemonger and sommelier Ned Palmer, matching cheese with beer works because “there is more of a range in flavours and textures in beer than in wine.

“Either they’re similar, so you get malty flavours, or it works by opposites, so the sharpness of the hops cuts through the creaminess of the cheese.

“The best matches suddenly bring out something new in both the cheese and the beer.”

Along with three other experts, Palmer will be teaching 40-minute tasting classes on making the perfect pairing of ale and cheese, filled with fascinating facts about the science and history of cheese-making.

“One of the most beautiful things is the expression on someone’s face when they have a really amazing cheese for the first time,” says Palmer. “I remember being angry, because I realised that all my life I’d been eating shit cheese.”

But how does one become a cheese and beer sommelier? “Just eat lots of cheese and drink lots of beer,” deadpans Palmer. “I think that’s the best way of learning something. Doing it and being active about it and asking questions.”

The ale will be sourced from almost thirty London breweries ranging from Fullers (founded 1845) to Leyton’s Brupond, founded this year.

A wide variety of artisan cheeses will be on offer, as well as home-made pies and barbecued sausages, all prepared with local beers. And if you eventually get beer fatigue, you’ll be able to switch to London-brewed cider. All of which accompanied by soul, funk and hip hop DJs.

It’s the perfect mix of Oktoberfest and sophisticated cheese and wine party – what more could you wish for?

← The Great Gatsby 3D – reviewEnd of an era? Mildmay Club ‘hanging by skin of teeth’ →