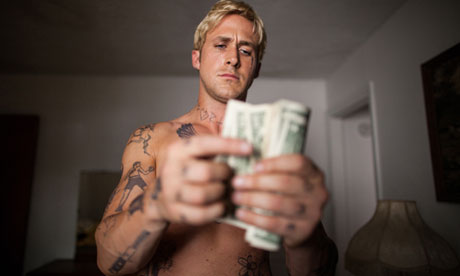 Ryan Gosling as Luke in The Place Beyond the Pines. Photograph: Atsushi Nishijima

Derek Cianfrance’s second collaboration with Ryan Gosling (previously with Blue Valentine) was hyped up prior to the film’s release as another Drive, primarily due to the character Gosling plays (a stunt driver who turns to criminality using his unique skill set).

However, there is no point making any further comparisons to Nicholas Winding-Refn’s slick and moody action-thriller as The Place Beyond the Pines is something different entirely and is in fact a fairly slow-paced drama about family and the issues fathers from contrasting backgrounds face in trying to combine work and providing for their children with being there as a role model and a presence.

The premise focuses on a “Globe of Death” motorcyclist, Luke Glanton [Gosling], getting into bank heists soon after learning he has an unexpected son and an ambitious young cop, Avery Cross (Bradley Cooper], dealing with corruption in his unit and tough decisions made in the line of duty.

Their lives coincide when Cross must chase Glanton after he flees the scene of one of his robberies. Although there some tense moments, this is not be mistaken for a high-octane thriller, because it is not. Instead this is a theme-heavy, interweaving story that is at times tinged with torment and other times life-affirming.

The film is set in Altamont, Schenectady in upstate New York, where we meet the heavily-tattooed, enigmatic Luke, who rides his motorbike as part of a travelling carnival.

Whilst performing locally, he discovers he has a child with ex-lover, Romina [Eva Mendes], and he quits the carnival – which is set to move on – and finds part-time work doing odd jobs for a mechanic, Robin [Ben Mendelsohn], whose auto repair shop is located in the forest, where they meet when Luke is bombing through the trees on his bike.

Romina has a new boyfriend called Kofi [Mahershala Ali] and although she still appears to have feelings for Luke, she is reluctant to have this unpredictable character back in her complicated life, especially as he does not have much money or prospects.

Luke is adamant that he will be a constant presence in her and his son Jason’s life and that he will find a way to provide for them.

This desire leads him into dodgy business with Robin, who tells Luke of the heists he used to do and the two soon combine as a bank-robbing double act.

This saga makes up the first of three acts in this striking tale, the second detailing equally complicated circumstances involving Avery Cross – also the father of a young son – who in his attempts to move up the ranks in the force, comes up against moral dilemmas and decisions that have knock-on effects to those around him and important in his life.

The final section sees the action fast-forward 15 years, where we encounter Luke and Avery’s boys grown up and we see how the choices that characters make in the past (good, bad or unavoidable) can haunt them and others in the future.

Gosling is excellent as Luke, playing the rogue in James Dean-esque brooding, bad-boy style – especially as he often talks with a cigarette hanging out of his mouth as he holds a steely look – whilst Cooper is impressive in portraying a determined and troubled man with a great burden of conscience on his shoulders.

The Place Beyond the Pines is engrossing from the start, with and a murky, eeriness that recalls Mystic River, aided by Mike Patton’s haunting score.

There is a great supporting cast too, including a menacing Ray Liotta and a typically-skittish Mendelsohn (Killing Them Softly) in a movie that wrestles with themes of fatherhood, dilemma and fate.

Look out too for an intense performance from Dane DeHaan (Lawless) as the teenage Jason.

If there is a minor quibble though, it would be that the film feels slightly overlong and desperate to round itself off, but this is still a moving and mature movie from a talented young filmmaker.

The Place Beyond the Pines (15)

The Place Beyond the Pines is showing at Hackney Picturehouse throughout April/May.