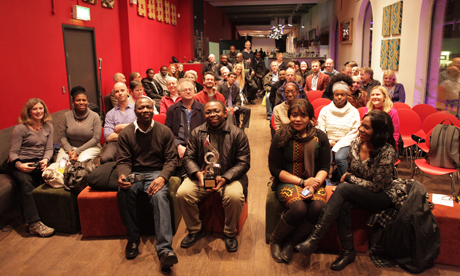 Clive James once wrote: “Those who lack humour are without judgement and should be trusted with nothing.” If this is true, then Leo Igwe should be put in charge of something very important right away.

Meeting this funny and generous man, you could nearly forget the incredibly serious nature of his work. Leo Igwe rescues woman and children accused of witchcraft in Nigeria, where belief in spells and demons is the norm.

Mr Igwe, whose promotion of reason and human rights won him a Special Achievement Award from the National Secular Society last month, came to London and spoke at the Hackney Attic (25 March).

Opening his speech at the Hackney Attic, Mr Igwe struck a defiant tone in welcoming his audience.

“It is said that black people don’t do atheism,” he said. “We can now confidently say: ‘we do’.”

The talk, ‘Breaking the Taboo of Atheism in Black Communities’, was organised by London Black Atheists, a group which supports people of an African background who want to ‘come out’ as non-religious.

Mr Igwe earlier told me that the belief in witchcraft is widespread in the Muslim north and Christian south of Nigeria. Pastors claim they have the power to exorcise evil magic from people, and will perform this service for a fee.

“Many Christian churches are cashing in on this situation,” he said. “They will make you understand that all your problems are the result of witchcraft or evil magic, malevolent magic.

“They will say they want to pray for your family, you give them money, they will go around and pour holy water, take olive oil and place it everywhere. The pastors are now the modern day witchdoctors.”

These ideas of possession and witchcraft have often led to appalling cruelty towards the children being accused, and have done so far beyond the borders of Nigeria. In March 2012, a couple in Newham was convicted of torturing and drowning a 15-year-old boy named Kirsty Bamu because they thought he was a witch.

Scotland Yard said it had investigated 83 similar cases over the previous ten years. In October 2012 the Department for Education produced a ‘national action plan’ to address child abuse related to faith or belief.

Mr Igwe seeks to challenge these beliefs and encourage people to ask questions, pointing out the flawed logic and the human cost of superstition.

Mr Igwe has been criticised by western academics for being “judgmental”.

He is bemused by the suggestion that belief in witchcraft is a part of African culture, and that the children accused will just have to put up with it.