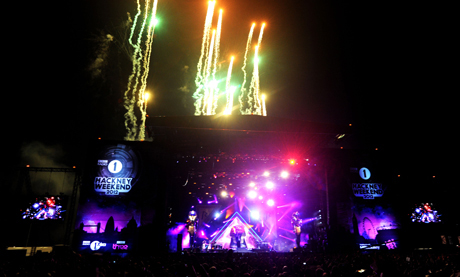 Hackney Marshes campaigners hit back this week at council plans to use the land for more events like last year’s BBC Radio 1 Hackney Weekend.

Tim Evans, a spokesman for Hackney Marshes Users Group, said the plans were a land grab by the council that would push out other users.

He said: “Our experience with Radio 1 Hackney Weekend was that all the other uses of the marsh were hindered or completely shut down for nearly a month.

“The council promised the damage would be fixed immediately and that hasn’t happened.”

Hackney Council hopes to build on the success of last year’s event, which saw thousands flock to see top musical acts including Jay-Z and Rihanna.

However, the plans have been met with concern by local campaigners. A petition launched by Save Lea Marshes is calling for the area to be protected from concert audiences and from use for private events.

Mr Evans said: “To a planner the marsh looks like empty space. In fact there is a web of existing uses and if you spend some time there you begin to understand them – strollers, regular dog walkers, kite flyers, nature lovers, picnickers.

“Pushing them off for five weeks of the Summer, the best times of the year, is not acceptable. It’s a land grab by the council for reasons that have nothing to do with local people’s needs or the nature of the marsh.”

Jenny Jones, London Assembly Member for the Green Party, said that the volume of people at these big events could damage the area and change the nature of the eco-system.

“They’re too concerned about making money and not enough about preserving the area.”

Ms Jones also criticised the use of Hackney Marshes for private commercial events.

She said: “They’re losing sight of the real aim, which is an area for everyone, not just the few that pay.”

The ongoing row over the council’s plans has seen a split in Hackney Labour party.

Councillors Barry Buitekant and Ian Rathbone wrote a letter this week opposing the council’s intended use of the marsh, whilst cabinet member Jonathan McShane defended the idea in a statement.

Cllr Rathbone said Hackney Marshes are an open space that needs to be protected. He said that the BBC event last year ruined the land and stopped people walking through the marsh.

“It’s open land and it belongs to the people. We had this experience over the Radio 1 event, and look what happened! So we’d just as soon not have it.”

Cllr Jonathan McShane, Cabinet Member for Health, Social Care and Culture, said: “There are currently no major events planned. We want to hear from everyone whether they currently use the Marshes or not.

“If we did go ahead, events would only be held in certain areas of the marsh, between May and August, and we would require organisers to sign up to certain obligations, including repairing any damage.”

Cllr McShane added: “I understand people’s concerns but 100,000 people, including 30,000 Hackney residents, attended the BBC Radio 1 Hackney Weekend, so there is clearly demand and interest in these sorts of events from residents across the borough.”

A consultation about the plans is being held by the council and finishes on 26 April.

More on the proposed plans for public entertainment events on Hackney Marshes.