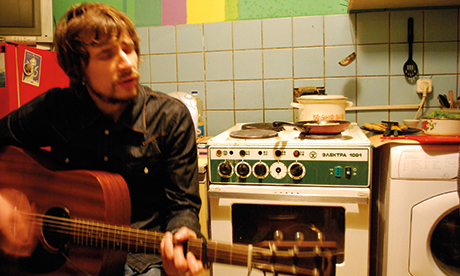 The Belarusian answer to Bob Dylan is alive and living in Hackney. Sasha Ilyukevich, 32, first came to the UK in 2001, working as a strawberry picker for six months and returning to settle here permanently in 2004.

His band, The Highly Skilled Migrants, can often be found playing or hanging out in folk venue The Dentist on Chatsworth Road. Whilst London has always had its fair share of Dylan sound-alikes, it would be fair to wager that Sasha is the only one singing in Belarusian, with the politically-charged nature of his songs making him a controversial figure back home, where Alexander Lukashenko, ‘Europe’s last dictator’,  has been in power since 1994.

He explains: “Some DJs on the radio chose two of my songs to play. One was a fable where I compare myself with a street dog, just barking with nobody understanding me.  At the end I say, ‘well, maybe it’s good to be a milk cow so I can get looked after and milked and be part of that society where you obey everything they say.’ I then start barking and mooing and it’s a contradiction – I’m questioning myself. But some KGB agents heard the song and forced it off the air.  After that they banned the rest of my songs even though they are not political at all.”

As a response, Sasha wrote the band’s latest single, Kolya, their most overtly political song to date, about President Lukashenko’s seven-year-old son of the same name.

“This boy goes everywhere with his father, to all the important meetings and military parades,” Sasha says. “He’s visited the Pope, met Hugo Chavez and once the former Russian president Dmitry Medvedev gave him a gun made from gold because he collects guns. There’s a picture online of it with all these military generals saluting him – it’s really strange and quite disturbing.”

There’s a disturbing quality about the song and accompanying video too. Over a chugging electric guitar, Sasha shouts the name Kolya repeatedly with an icy sneer, the video showing animated images of faceless citizens, storm clouds, wild animals and military personnel. Through moving from subtle criticism to outright expressions of dissent, the band has received what most emerging acts crave – media attention. Not all of it, however, has been welcome.

“I had an interview on the BBC about [the song],” he says. “It was a Monday, and I remember we had about 680 views on YouTube.  The next day we got over 20,000 hits and it was all over the news in Ukraine and in Belarus. The same day someone tried to hack into my Facebook, Twitter and YouTube accounts and I got quite a few insulting emails and comments.  As a musician you want to be heard but when this kind of song is heard and it’s all over the news I don’t know if I should go to Belarus for the next few months.”

Like Dylan before him, Sasha rejects being called a protest singer.  “It’s not like protesting,” he insists.  “When you create, whether it’s songs or whatever, it always reflects back on the environment where you come from.  And it’s not even being political, it’s just being honest about what’s happening there, how the dictatorship has transformed society and brainwashed the people.”

For more go to the Highly Skilled Migrants on facebook.