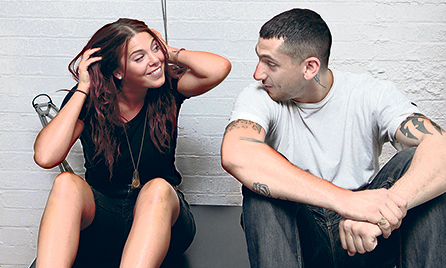 The sun beams through the wide windows of a Shacklewell studio onto three photocopier-sized machines. This is Ditto Press, established in November 2009 by Ben Freeman and Lynsey Atkin, and its portfolio ranges from art books (their stock in trade) to chocolate wrappers and CD covers.

The ‘photocopiers’ in the office are actually risographs, or stencil printers. Typically used by schools, prisons and political campaigners, the printers deliver modest runs – Ditto’s biggest job was 6,000 copies of an A-Z of coffee, but they can do as few as ten copies for individual clients.

The company’s distinctive style has attracted attention from bigger brands such as Nike and the V&A, and its books are stocked by every art bookshop in the city.

However, it’s the work from independent clients that is Ditto’s bread and butter. Half the work is for London-based clients, of which many jobs come from Hackney – for example, Rich Mix in Bethnal Green, the Jaguar Shoes collective and a creative agency in Hoxton, Rosie Lee, have all worked with Ben and Lynsey.

Being a local business is important to the two founders. They’ve been in their Shacklewell Studios premises for a couple of years, working alongside neighbours such as a magazine company, Good Publishing, illustrator Ben Weaver and the LNCC shop in the the basement. While Ben admits they’d like to expand, he also says he can’t imagine leaving Hackney.

Last year marked a new success for Ditto as they published their first literary book, Duncan Fallowell’s How to Disappear. The hardback is bound in charcoal-coloured linen, but inside the typography is playful and text is printed in one of the risograph’s 20 bright inks – just the kind of edition that the bigger publishers are struggling to get to market now.

But while the book was a critical success, and won the UK’s only prize for a literary memoir, it is not the kind of work Ditto will pursue. “The literary world is quite different to the art world and I’m not sure we’re trying to break into it,” Ben says.

For him, Ditto’s ability to control all steps in the process, and offer a personal service, have been unique selling points: “In a way, we have a small advantage over the larger publishers, even though we don’t have the economies of scales, because authors aren’t interested in e-books – they appreciate the chance to have their work designed and produced in hard copy. Art publishing as a niche isn’t as vulnerable as other parts of the industry – things like coffee table books can’t be digitised like novels can.”

Two more books have been lined up for April and June. And although the photography of an ex-para and former skinhead aren’t the first things that spring to mind when you say ‘coffee table’, it is clear that literary success hasn’t turned Ditto’s head.

For more go to Ditto Press.