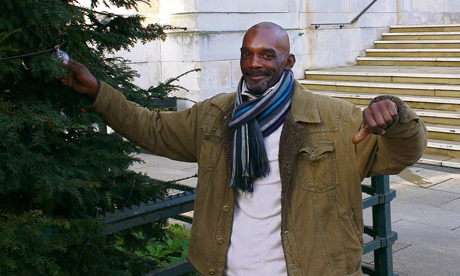 Newton Simpson: “A few years ago, we had the nicest lights”. Photograph: Riaz Naqvi

Residents have questioned the amount of money Hackney Council is prepared to spend on seasonal street lighting as research shows the borough to be the worst afflicted by cuts.

According to a report released last month by Newcastle City Council, Hackney has had to deal with cuts of £261.49 per head over the 2010 to 2013 period.

The council justified its festive lights cost last year by pointing to the Love Hackney, Shop Local campaign, which aims to get residents spending money in Hackney stores, rather than favouring shopping and entertainment hubs such as Westfield in Stratford.

Speaking about the campaign which is continuing this year, a council spokesperson said: “The Love Hackney Shop Local campaign is an on-going drive to get residents and shoppers from across London to make the most of Hackney’s excellent range of independent shops and markets. The council is actively promoting local traders and shops during this festive period.”

The council spokesperson said  the festive lights will cover not only Christmas, but also Hindu, Jewish, Buddhist and Christian festivals up to February 2013. The council is attributing the reduction in cost to the use of energy saving lights.
However, shopkeepers do not believe the lights alone will keep locals shopping in Hackney.

Ann Martin, who has worked for four years at Sense, a Mare Street charity shop, said: “When they light up the square, it’s very impressive. But it won’t stop people going to Westfield. If you want to keep people shopping here, lower the rents – a lot.”

Ms Martin believes lowering rents would allow local stores to be more competitive with large chains through offering better prices. In terms of spending priorities, she would like to see the council spend more on policing and youth services.

Newton Simpson, a maintenance man and lifelong Hackney resident, pointed out that much money was spent on “window dressing” in the build-up to the Olympic summer. “Lights? They make people feel good”, he said. “A good few years ago, we had the nicest lights compared to places such as Lewisham and Bond Street”.

Despite the rise of Westfield, he believes that “people who shop local are still going to shop local.”

Giulia Dean, manager of Custo Barcelona in Westfield, explains why people choose Westfield over shopping locally, saying: “People go where the crowd is. It is an all-inclusive concept shopping centre that gives you more activities than just shopping: bars, pubs, dinner and a movie are all options too.

“It’s being heavily promoted in conjunction with superstars like Rihanna, who turned on our Christmas lights this year.”

Yet some residents were feeling less festive about the lights. Jonathan, who has worked on Mare Street since 1995, said the lights “may as well be non-existent.

“The lights we do have aren’t even in different colours. Don’t get me wrong, if the council did have the money, I would have no problem, but I would rather the council spent more on youth services.”