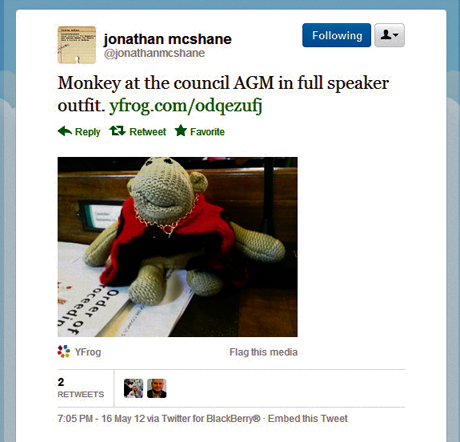 Tweet talk: Council says there has been no change of policy and the constitution will remain the same

Mobile phones can be used during council meetings, Hackney Council has declared, despite the fact that its constitution states they should be switched off.

The powers-that-be at the Town Hall said they would continue their ‘common sense approach’ to the use of mobile phones and electronic devices, although the constitution will not be changed to reflect this.

Speaking to the Hackney Citizen, a spokesperson for the Council said: “We won’t be stopping people using mobile phones, whether you’re a journalist, a member of the public, or a councillor.”

They said the use of phones, electronic devices, and social media networks such as Facebook and Twitter would be allowed as long as it “doesn’t disturb the meeting.”

When asked whether this apparent change of policy will be announced so the public are aware of it, the spokesperson said: “It doesn’t need to be.”

The confusion over the council’s policy on using mobile devices in meetings has afflicted council members as much as the general public. At a consultation meeting on 5 November, a council officer responded to reports of councillors using Twitter in council meetings.

She said: “If council members are using Twitter in meetings, it was because there has been a policy change,” and added that the constitution would be amended in November to reflect this. However, this was flatly contradicted by the council spokesperson’s statement a few days later, which said the council’s policy had not changed and that the constitution will remain as it is.

Hackney’s constitution states: “Any mobile phone or other electronic communications device taken to a meeting should be switched off for the duration of the meeting.”

This statement is part of the same article which prohibits smoking.

Members of the council regularly use phones and iPads during meetings, and often leave the room to answer phone calls. Social networks such as Twitter have been used to hold conversations while in meetings, including by two councillors in May who shared a photograph of a toy monkey.