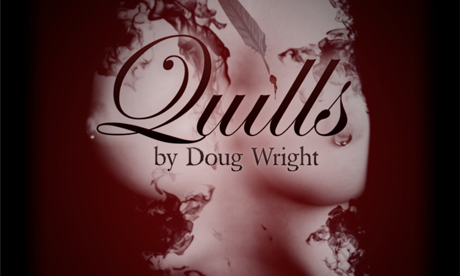 Stoke Newington’s White Rabbit Cocktail Club opens its doors as a theatre venue for the first time this month with Quills, a play re-imagining the last days of the Marquis de Sade told from the cold dungeons of Charenton insane asylum in 1806 France.

“The issue of censorship, the reason Doug Wright wrote the play originally, is one that will sadly never go away, says the company’s co-founder and artistic director Andy McQuade. “Hopefully audiences will be in awe of the performances and the script; laugh a lot, jump a lot and leave pondering just how shaky so many of our societal foundations are, whether they purport to be ‘good’ or ‘bad’ or immoral.’

For a libertine that scandalised a nation with his sexual philosophies, pornographic literature and bacchanalian lifestyle, the Marquis de Sade has kept a remarkably low profile in the London theatre scene until now.

But Second Skin has made a name for itself plucking neglected plays out of the rafters and re-working them with intensely atmospheric and provocative performances in quirky theatre spaces.

“The White Rabbit is the perfect setting for our productions: dark, intimate, atmospheric, and full of little nooks and crevices and alcoves. The space inspires the way we stage our productions and sometimes even which plays we choose to produce,” says the company’s creative producer Jessica Ruano.

She says Second Skin’s audience base is swelling in Hackney, and she goes on to describe the rise of small independent theatres and the role they play in developing the local creative community:

“London’s West End is chock full of shows – but I feel like some of the most interesting theatre is found where you wouldn’t expect it: in those intimate spaces that seat only 30 or 40 people, in those obscure areas that are not always accessible by tube, from companies that you may only know through word of mouth,” she says. “Theatre on the fringe – one of London’s gems.”

Theatre-goers are encouraged to stick around for a drink to unwind with the cast and crew afterwards to talk about the experience.

“We really can’t see the point in staging Chekhov or Shakespeare,” says McQuade. “Not because we don’t love those writers but simply because: why bother when they are attended to with clockwork regularity? We believe audiences want to be provoked, have their expectations and beliefs challenged and be encouraged to invest something of themselves in a theatre show. If an audience member ever walked away from a show feeling nothing at all then I would say we’d failed.”