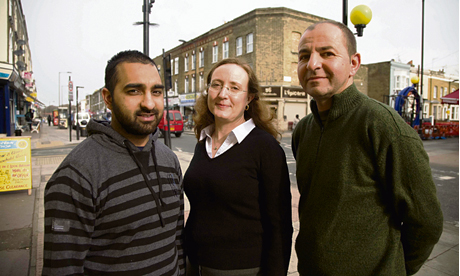 Chatsworth Road traders old and ‘new’: Omar Nissar, manager of Carnival Cards, which has been trading for over two decades; Venetia Strangwayes-Booth, owner of Venetia’s and and Rémy Zentar, owner of L’Epicerie@56.

This article titled “Chatsworth Road: the frontline of Hackney’s gentrification” was written by Mina Holland, for The Observer on Saturday 7th July 2012 19.20 UTC

It’s late morning on a Sunday and Venetia’s Coffee Shop on Chatsworth Road, London E5, is teeming with the elevenses crowd. Mums sip on flat whites, nibbling courgette cake and chatting as their kids fight over an abacus, splattering “babyccinos” across the wooden floor. It’s hard to reconcile this scene of middle-class chaos with the surrounding area of Clapton – once one of Hackney’s worst and home to the real chaos of nearby “Murder Mile”. As local childminder Sue Burton says: “Here in Venetia’s you can often forget where you are.”

Venetia’s was the first shop unit on Chatsworth Road to go upscale five years ago. Since then, middle-class bohemians, often priced out of other areas in east London, have continued to put the chic into shabby here, with a creperie, pop-up gallery spaces and new Sunday market.

You might wonder what’s taken the middle class so long to yummify Chatsworth Road, just a gentle bike ride from Shoreditch, a short walk from Homerton’s new-look Overground station and green spaces, including Hackney Marshes. Most importantly, it has plenty of Victorian housing stock crying out for a lick of Farrow & Ball. Chatsworth Road is on the frontline of gentrification; a work in progress.

The early stages of gentrification have created some stark juxtapositions here. Empty shop fronts with peeling paintwork and outdated 081 phone numbers are now interspersed with the likes of L’epicerie, which sells essentials such as jamón ibérico. Yet the bookies, ethnic grocers and Seniorita’s massage parlour remain. The area’s traditional demographic – white working class, Turkish, Asian and Afro-Caribbeans – increasingly share the space with newcomers, who attend arty happenings such as a “site-specific event in an old newsagent shop”, which offers “a surreal and often comic commentary on the monotony of the everyday”. And then go for some organic Sussex wine.

Change at this speed in a borough still riddled with social problems is not as organic as the market’s root vegetables. The Chatsworth Road Traders and Residents Association (CRTRA) is the volunteer-led group that set up the new Sunday market in June 2011. Their chair, Euan Mills, says: “Gentrification has never been managed successfully before. We don’t want people to feel victims of urban change, so we’re taking a more proactive approach than elsewhere.” And, though many agree the market has breathed new life into the area, a disconnect is still evident. Original local residents, including those living on nearby estates such as Kingsmead, simply aren’t in the market for a loaf of bread at £3.50.

Several original businesses, including a Kashmiri takeaway, hardware store and cab office, say they have embraced the market because it brings in people with money to spend and makes the area safer. Yet there is widespread agreement that it could be improved further with greater involvement from the wider community.

Some businesses are doing their bit independently. Shane Harrison, proprietor of new restaurant Shane’s on Chatsworth, is committed to hiring staff locally and keeping money in the area. “I’m always wanting labourers and kitchen porters. It’s hard, though, because they don’t put their hands up. I have to hunt them down.”

But noble as the independent high street is, how useful is it? On the nearby Clapton Park estate, Chatsworth Road prices are not the only issue. They want useful, everyday commodities available locally – a fish shop, a Chinese takeaway. Sourdough and comté cheese are not part of their grocery lexicon. Julia Johnson, who runs the Glyn Arms pub on the estate, says: “They are not catering for us. I go to Ridley Road market now because there’s good cheap fruit and veg and products for black hair.” The estate senses it is being excluded, she says, and it rankles. “They held a jubilee party up on Chatsworth Road. Did anyone invite us? No.”

There are numerous stories about rent increases and house prices, and not just in the more desirable Victorian streets. Mustafa Korel, campaigns co-ordinator for Hackney Green party, says his mother’s ex-council house in Hackney central, bought for £70,000 15 years ago, was recently valued at £339,000. Few of Hackney’s working class could these days afford an ex-council house at this price.

They are not the only ones under pressure, says Rowland Atkinson, lecturer in urban gentrification and displacement at the University of York. With a Victorian four-bed house within walking distance of Chatsworth Road now priced at around £550,000, even the middle-class themselves are being pushed out of gentrifying areas. “In London, everyone feels like a victim.”