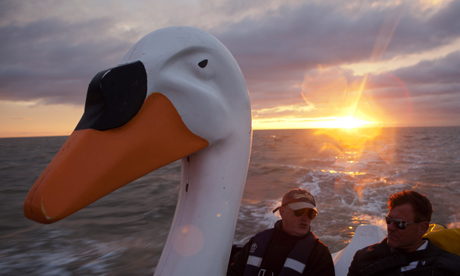 Swandown: from Hastings to Hackney

In September 2011, Andrew Kötting and Iain Sinclair navigated the inland waterways between Hastings and Hackney by method of a pedalo in the shape of a giant swan. Their adventures are chronicled in a newly released lyrical film-diary, shown at this year’s East End Film Festival.

Documenting a test of physical endurance, Swandown is being dubbed an Olympian Odyssey for the way in which the film conjures the spirit of Olympic ambition and triumph, without the pomposity and ceremony of the occasion itself.

Kötting and Sinclair first met in St Leonards-on-Sea and quickly found themselves to be kindred spirits, sharing a love of artistic eccentricities that quickly became a catalyst for collaboration.

Sinclair had suggested swimming across Hackney’s canals and something about his enthusiasm for this inspired Kötting. “I had found some pedalos in Hastings, bobbing up and down on a stagnant pond, so I emailed him to say ‘I think we should attempt to circumnavigate Hackney, but I think we should do it in a swan shaped pedalo,” he explains.

It was from here that the project’s ambition escalated. An inspired Sinclair proposed the idea of making a journey from Hastings to Hackney in the swan named Edith. The concept of two ageing guys pedalling a giant swan across the waterways of the south of England delighted them. Their ambition was to conjure a conceptually absurd, fairy-tale world.

The journey would be more difficult than they imagined. Far from the leisurely voyage that the pedalo is known to symbolise, they found themselves dealing with problems ranging from Kötting’s contraction of trench-foot, brought on by reluctance to change his wellingtons, to having to drag Edith across fields and roads, as the rivers dried to narrow streams.

Swandown is an exploration of the two places the filmmakers call home, as much it is a film about physical endurance. “Hackney’s old artistic-bohemian population moved down to the South Coast in search of freedom, inspiration and an affordable cost of living,” says Sinclair. “We had the idea of doing an anti-project, against the global corporate entities of the huge projects being done in Hackney in the name of the Olympics.”

Swandown is a charming tale of triumph over adversity, but also offers a unique look at a side of the landscape of the south of England which is rarely seen or explored.

The London premiere is set to take place at the Rio cinema at 3.30pm on Saturday 7 July as part of this year’s East End Film Festival.

The screening will be followed by a question and answer session.

Tickets for the screening and Q&A together cost £8.50.