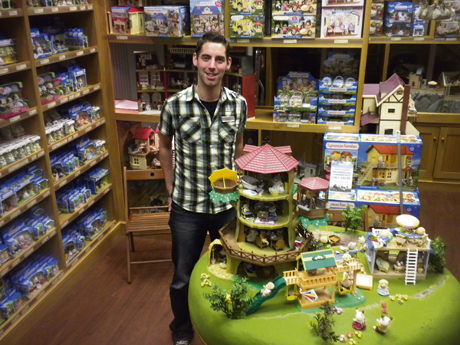 Travel west from Stoke Newington to Finsbury Park and you are likely to pass the unassuming headquarters of a parallel world where there is no alcoholism, no drug dealing and no gun crime but many a smartly dressed rodent sipping tea.

Welcome to the quaint and gentle world of Sylvanian Families, the cute miniature toys that first hit the shelves of toy shops across Britain 25 years ago.

Mountgrove Road, a residential street with a small parade of shops in a sometimes overlooked area of Hackney smack bang on the border with Islington, is a site of pilgrimage for children as well as many adults who collect, with varying degrees of obsession, these pleasant creatures.

The street is home to the world’s only specialist Sylvanian Families shop, still going strong 20 years after it was opened by its owners Angela and Simon Harwood.

“We’ve had people come in and ask ‘Is this a front for something?’” says Ben Miller, who has managed the store for the past eight years and who has impeccable qualifications to work there – he himself was a big fan of Sylvanians and a regular visitor to the shop as a child.

“It’s the second coming for Sylvanian Families, so to speak,” the 31-year-old explains. “My gran actually bought them for my brother for his birthday when he was four. He wasn’t terribly taken with them and I was. Our customers are often parents of young children who remember it from when they were kids, or people who were into it when they were children and are getting back into it as adults. Lego has had the same kind of revisiting of itself. The fact that Sylvanian Families has been going for 25 years without a break is significant. Not many toys do that.”

Sylvanians – mice, deer, squirrels and other woodland critters – inhabit a world much like ours though without its many social problems. Perhaps this is due to their evident civic responsibility. The latest issue of the Sylvanian Families Collectors’ Club’s magazine, which has subscribers worldwide, boasts articles about libraries, theatres and post offices, none of which look set to be closing any time soon.

The magazine also contains a ‘Sylvanian romance’ inspired by Jane Austen: “It is a truth universally acknowledged that a single skunk in possession of a good fortune must be in want of a wife…”

“The toys are not really striving to be anything from the present day,” explains Miller. “The way they dress is traditional, if not slightly time warped. And it’s a little bit sexist at times – mum is usually an expert cook and dad goes out to chop down trees all day. We changed that slightly when we did the storylining for the new school, which came out a couple of years ago. I made the mother the head teacher. The dad was just head of PE.”

The shop is unusual in that, as well as selling the toys both directly and online, it serves as an ideas factory for Flair, the company that distributes them in the UK. It is a job Miller takes extremely seriously, running focus groups and carrying out market research to determine the direction of the Sylvanian Families ‘concept’. Like a soap opera script writer, he must also help create back stories for new characters. In doing so he draws on local knowledge – the name of a new school was inspired by nearby Highbury Grove School.

Every member of staff in the Sylvanian Families shop also plays a character from the franchise.

“When you’re talking to kids on the phone or answering emails or writing letters – we still use a pen and paper – you use that name,” says Miller. “As far as customers are concerned, I am Rocky Babblebrook. He was the rabbit that ran the general store in the Sylvanian village, so thus it was decided that when I started to run this shop I would play him.”

The toys are made in China by a respected Japanese company, Epoch, which has a reputation for ethical practices.

“The staff are being looked after properly and the factory workers are paid decent wages,” says Miller. “Parents can sometimes be concerned about exploitation when they hear something has been made in China.”

In Japan there is a Sylvanian Families theme park – another pilgrimage site.

Sylvania, meanwhile, is not set anywhere in particular. The word comes from the Latin for ‘woodland’ though Miller thinks the toys are “quintessentially English despite coming from Japan”.

“I think the reason parents like it and why they keep buying it for their kids is that it’s got wholesome values,” he says. “It’s not Bratz (the range of dolls designed to look like members of a modern girl band). They don’t wear makeup. They don’t listen to pop music. It’s charming and safe. There’s no undertone of anything. We are also very lucky in that it’s a high quality product and there are very rarely flaws with it.”

So, does he ever get sick of Sylvanian Families? “You couldn’t not like the product and work here,” he says. “If you didn’t like the product, you’d go absolutely cazy. I’m very lucky in that I have a job I like.”