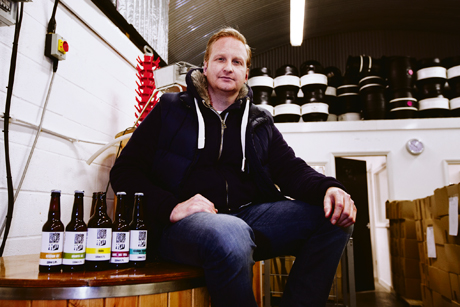 A Hackney brewery that opened just five months ago is planning to expand and rivals are set to open in the borough soon as part of what is being seen as a real ale revolution centred in East London.

London Fields Brewery, a microbrewery that opened in August under a railway arch in Helmsley Place near London Fields station, became the first commercial brewery to open in the borough in over 20 years.

The venue is owned and run by Jules Whiteway and Ian Burgess, who also runs Climpson and Sons coffee shop on Broadway Market.

The brewery is already producing a staggering 13 beers, including two lagers and a selection of ales, ranging from traditional ales through to hoppy American IPAs.

Mr Whiteway and Mr Burgess have hosted live music events in their brewery and these have been so popular that the pair have hardly made any wholesale sales. Despite brewing four times a week, they simply cannot produce enough beer.

Because of this, they have decided to move to new, larger premises just round the corner under another railway arch.

The move will allow them to expand from a 2.5 to a 12 barrel brewery, but unfortunately it means there is now a break in production and events until February or March while they relocate.

The London Fields Brewery will not hold the title of Hackney’s only brewery for much longer. Two friends who work at the acclaimed Charles Lamb pub in Islington are set to start brewing under the Kingsland Viaduct – yet another Hackney railway arch – in February.

Peter Hills and Jon Swain decided to start the Hackney Brewery after brewing at home for a while.

They will launch with a golden ale, a best bitter and an American pale ale, which they hope to have available by the end of March.

Smack bang on Hackney’s borders, meanwhile, are two other new breweries that had their equipment delivered and set up a day apart from each other and that also sold their first beers at the end of August.

A mile south of the London Fields Brewery in Bethnal Green is the Redchurch Brewery, which specialises in bottled beers and which is owned by former consultant lawyer Gary Ward, who says he too is now looking to acquire additional premises for storage, sales and distribution.

He also has plans to adapt his current premises by fitting some taps on the mezzanine, which currently serves as an office and tasting area, so he can run events selling his “bold, strong” beer directly to customers.

A couple of miles north in Leyton is the East London Brewing Company, specialising in more traditional ales.

Its owner Stuart Lascelles says he doesn’t see competition between the three new breweries as a problem.

“We all had different business models,” he adds. “My main competitor is Redemption (in Tottenham), but they’ve been incredibly helpful.”

Being in Leyton gives the former chemist the advantage of cheaper rents, allowing him to have a bit more space, and already he is breaking even. He is currently brewing once a week, producing 25 casks, but he has the capacity to brew twice a week and expects to be producing 40 casks in six months.

The East London Brewing Company has just released its third beer, the Nightwatchman – a slightly lighter and sweeter bitter than the Foundation Bitter – and it is selling well.

Mr Lascelles says: “We’ve supplied to over 30 pubs, including a few outside of London.

“I’ve heard that it’s even got as far at the Oxford beer festival, some Manchester pubs and Huddersfield.”

The East London Brewing Company has supplied a number of London pubs, including the Wenlock Arms, the Albion and the Jolly Butcher.