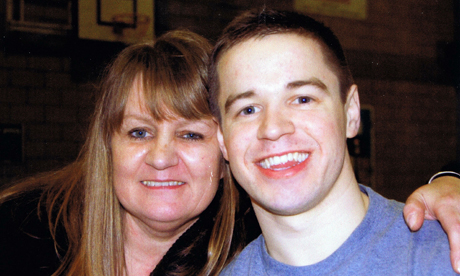 Sam Hallam and his mother Wendy

A play about Sam Hallam, the Hoxton man who was jailed as a teenager for a murder he insists he did not commit, is to be staged at a prestigious theatre in Islington in the new year.

em>Someone to Blame, billed as a “verbatim” drama, tells the story of how Mr Hallam was tried and convicted of the murder of Ethiopian refugee and trainee chef Essayas Kassahun in Finsbury in 2004.

In October 2005 he was given a life sentence and ordered to serve a minimum of 12 years. He has spent the past seven in prison.

Mr Hallam has always insisted he was playing football half a mile away at the time of the murder.

During a newspaper interview inside HMP Bullingdon in Oxfordshire, where he is currently imprisoned, in 2009 he said he would never admit to a crime he “did not commit” even though doing so might increase his chance of being eligible for parole.

His mother Wendy has vowed never to give up her fight to clear her son’s name, and the high profile Justice For Sam campaign has been backed by Patrick Maguire, who spent five years in prison as a teenager after being wrongly convicted, along with several members of his family, of making explosives used by the IRA in 1974.

Mr Hallam’s case was referred back to the Court of Appeal earlier this year following an assessment by the Criminal Cases Review Commission and new evidence suggesting he had not been at the scene of the attack on the St Luke’s Estate, when Mr Kassahun was stabbed in the head after being set upon by around 40 youths.

The Justice for Sam campaign has staged several benefit gigs at the Macbeth pub in Hoxton.

Someone to Blame is written by Tess Berry-Hart from spoken evidence and directed by David Mercatali.

The play will be performed at the King’s Head Theatre in Upper Street from 6 -31 March.