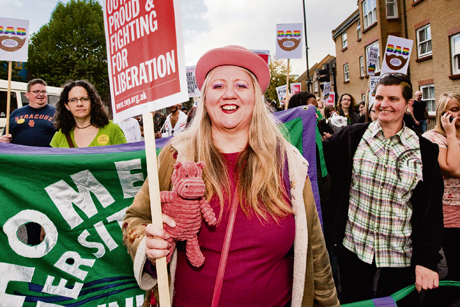 East London’s gay pride march was hailed a success by organisers on Saturday after passing peacefully through Hackney and Tower Hamlets without a hitch.

Hundreds of people from the LGBT and wider community marched from Hackney Town Hall to Bethnal Green Road carrying placards and chanting slogans calling for an end to racism, homophobia and government cuts.

Rene, a Slovenian living in London for the past seven years, said: “This is not just gay pride but its a community coming together saying everybody’s welcome. You can see the placards about the immigrants, about the cuts, about gay people; it’s not just one person’s fight, it’s a community call. To fit in sometimes you have to stick out, be visible and stand up for yourself.”

The parade, which was given a police escort through the busy Saturday streets, was followed by a festival of music, cabaret and debate at community space Oxford House, in Bethnal Green.

Lutfur Rahman, the directly-elected mayor of Tower Hamlets, was given a warm welcome after making a surprise appearance telling the audience the LGBT community is an important part of the area.

Terry Stewart, director of East London Pride, said: “It was excellent. The local community turned out and we came through the East End with no attacks and no abuse which puts to rest a lot of the arguments that the East End is full of hate. There is an issue of homophobia but it’s not as bad as people make out.”

East London Pride comes six months after a similar event in Tower Hamlets, East End Gay Pride (EEGP), was aborted after a public spat between organisers and local activists who became suspicious it was aimed at provoking the local Muslim population.

A Muslim lesbian and gay organisation Imaan later produced evidence that revealed a former member of the English Defence League was one of the organisers behind the event.

Veteran gay rights campaigner Peter Tatchell, who joined the East London Pride parade, said: “It’s really important we celebrate the huge contribution by the gay community to East London in light of the recent controversies over the gay-free zone stickers. East London has not been and will not be a gay-free zone.”

But he criticised Muslim organisations and Luftur Rahman for not supporting the event unaware the Mayor was due to speak moments later.

He said: “That would have sent a very strong signal of our communities being united against homophobia and anti-Muslim prejudice.”

However Denis Fernando, of the Lesbian and Gay Coalition Against Racism, warned it is important to remember that homophobia is not unique to any one community.

He said: “I’m from the catholic community and my family aren’t necessarily over the moon about me coming out.

“In order to tackle homophobia it needs to take many different forms, so sometimes standing in the streets and marching with placards, as we have today, is appropriate, but at other times it’s not; what is needed is slow patient dialogue just about the fact sexuality is one of our many identities.

“It’s a complex issue with many different dimensions so it was very encouraging to hear people chanting ‘no to homophobia’ and ‘no to Islamophobia’ and ‘anti-racists out and proud’. They were making it very clear to the community that we are with you, we are part of you. I think lighter touch politics can go much further than grand standing.

“One of the best statements of unity that has happened in the last few weeks was on 3 September (when the EDL held a demonstration in Tower Hamlets). I spoke on a platform as an out gay man with three other LGBT speakers, representatives of the mosque and the Mayor of Tower Hamlets and we said no to the EDL.”