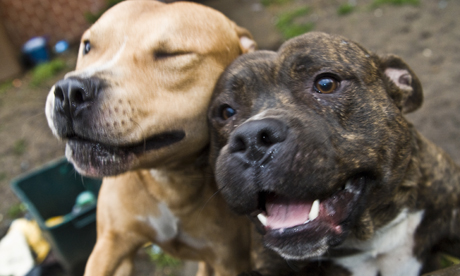 Staffies like these are considered ideal pets by the UK Kennel Club. Photograph: Dionisio Plaza

Dog owners may be forced to keep their pet on a tighter leash if new measures aimed at curbing aggressive animals get the go-ahead.

The Town Hall is consulting residents on the introduction of so-called dog control orders, which include powers to ban dogs from certain areas including playgrounds.

Other provisions would include a bye-law forcing owners to put their dog on a lead where requested, and another prohibiting off-lead exercise in areas less than half a hectare in size.

Councillor Sophie Linden, cabinet member for crime, sustainability and customer services, says: “We know that most dog owners in Hackney are responsible and control their dogs in public. We also understand the pleasure that owning a dog can bring. However, residents have told us they are concerned by the minority of owners who allow their dogs to act aggressively and intimidate other people and animals. Through this consultation, we are asking what residents think about our proposals, which we believe will help us tackle irresponsible dog ownership in Hackney.”

The “dogs on leads” order is viewed by some residents as heavy handed. Scientific studies have shown that off-lead time is necessary for socialisation and that dogs are less aggressive and neurotic towards people and other dogs when allowed time every day to run free.

However, Barbara Read, a pet owner and animal welfare campaigner, said she was cautiously optimistic about the measures.

She said: “From reading the material and going to the consultation and hearing what Cllr Sophie Linden had to say, I gather the council have consulted quite thoroughly with the Dogs Trust and the Mayhew Animal Home. I think that some of the proposals are actually quite good, particularly what the council expects from a responsible dog owner. I think it has been quite a thorough investigation. They have not just said that dogs must be on lead in public places which I think would be very bad.

“In Clissold Park, for example, it might not be a problem if there are dog-free zones as it’s a very large park. It might actually help stop some of the antagonism towards dogs by families with children if there were certain areas such as children’s playgrounds where dogs are not allowed. However one of my concerns is that due to budget cuts suffered by the council, there won’t be sufficient staffing. Is one Animal Warden in a borough as big as Hackney, with the problems that Hackney faces, enough? I would like to see more Animal Wardens and more people working on education.’

The consultation, which runs until 14 August, is part of a wider initiative to tackle irresponsible dog ownership in the borough. The measures undertaken so far include support to do owners in training and pet care, as well as microchipping 250 dogs for free.

To take part in the consultation, phone 020 8356 4504 or complete the questionnaire on the council’s website.

← How power, money and art are shifting to the East EndHackney floating allotments win green award →