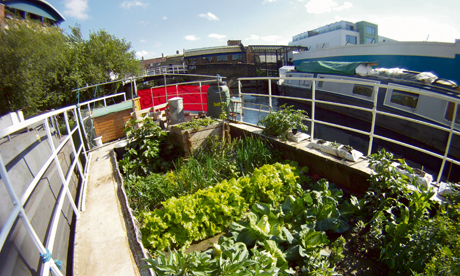 Canals in Hackney Users’ Group (CHUG), were delighted to win the Conservation Foundation’s prestigious Edible Corners award, which was presented to them last month.

CHUG is the charity and community of boaters who live in Kingsland Basin, the moorings next to Kingsland Road. There are 14 boats housing 19 year-round boat-dwellers.

The award was granted to CHUG’s allotment boat, which was given to the charity in September 2009 by the local organisations Shoreditch Trust and Capital Growth, with support from British Waterways and the Mayor of London.

“It’s been a lot of work over 18 months to get the boat to this thriving state. We didn’t realise at first that a container garden has different requirements. We’ve become experts in aeration and drainage, not to mention all of the beneficial creatures – worms, lacewings, ladybirds – we’ve had to introduce into the allotment,” said CHUG’s Tim Storey.

Anyone familiar with the this little section of canal will know that it’s in a real state of upheaval, with five huge developments currently underway. The basin used to be a little urban wilderness, with mature overhanging trees – including a huge and productive cherry tree – creating an environment that was home to countless insect and bird species. As the developments began and the trees were cut down the basin’s birdsong was replaced by the sounds of heavy machinery.

Thankfully CHUG were offered the allotment at just the right time, and as it has become established they have seen the return of the insects – dragonflies, mayflies and butterflies of all sorts – which were then followed by birds. Wrens, blue tits, blackbirds and swallows have come home. The basin also has resident coots, moorhens, cormorants, woodpigeons, swans, Canada geese and many other species, as well as bats. Residents have not yet seen the kingfisher that used to live here, but they’re hopeful.

As well as supporting local wildlife, the prize-winning allotment is now supporting the community for its second summer. Thanks to the tireless efforts of the basin’s keen gardeners, there has been an abundance of veg, from spinach, lettuce, rocket and countless herbs, and with onions, potatoes, aubergines, tomatoes, beans, asparagus and some dramatic artichokes on the way, among many other things.

They have fruit too – the rhubarb is superb, and the soft fruit – blackberries, raspberries and strawberries – are just about to have their day.

Last season’s crowning glory was a marrow weighing in at 3.52kg, which CHUG donated as a prize in the raffle at last summer’s open day.

The Green Corners award was devised to honour the unsung gardening heroes, and encourage Londoners to make the capital greener and more biodiverse. The botanist David Bellamy chaired the jury, which chose the overall winners from a year’s worth of monthly awards.

The award, presented to the CHUG delegates at the prestigious prize-giving event at the Rebecca Hossack Gallery in Fitzrovia last month, means a lot to CHUG. They hope that it will encourage people to make the most of the green space they have – even if it’s just a tub on a windowsill. With central London as heavily populated as it is, a little creativity goes a long way, both in making a pleasant environment for ourselves, each other, and the urban wildlife, and in working towards a sustainable future.

More about CHUG and its summer open days.

← Have your say: council consults on dog control in HackneyHackney GP joins protest against NHS changes →