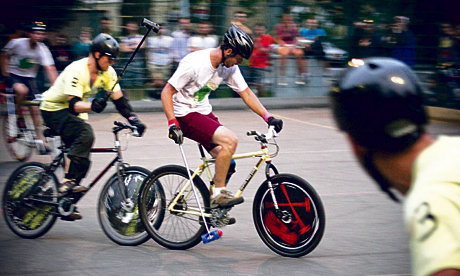 Invented way back in 1891, bike polo is resurgent. From a small group who used to play on a court near Brick Lane, the number of players has quickly increased to over 200 players.

Their main representative body is the London Hardcourt Bike Polo Association. Since 2009 it has built up a network of enthusiasts to promote the sport and lobby for official recognition from Sport England. Last year saw the first London Open, an international tournament that attracted 48 teams from across Europe, the USA and Canada.

With even more teams registered, this year’s contest taking place on Hackney Downs on the 30th and 31st July promises to be much bigger and better. Anyone who wants to see some “beautiful goals and spectacular crashes” is free to attend and cheer, heckle or jeer.

Location: on the top of Hackney Downs; the nearest station is Hackney Central

Note: this is an amended version of the article that appeared in Hackney Citizen July 2011 print issue.