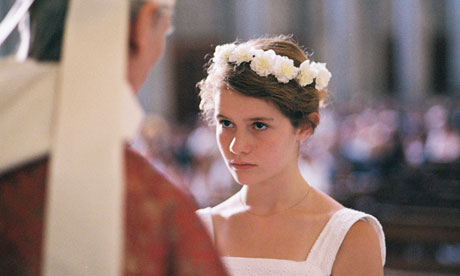 Thematic coming-of-age film Love Like Poison, by French director Katell Quillévéré, tells the story of 14-year-old Anna [Clara Augarde] and her difficulties dealing with her parents’ recent break-up and her own sexuality, amongst the backdrop of a quaint village with a strong religious community.

There is a delicate honesty in Quillévéré’s first full directorial picture and this is most bravely delivered by another debutant, Augarde, playing the confused and inquisitive protagonist with a quirky charm that carries this short family drama. The film focuses on themes such as faith, innocence, fragility and beauty.

Anna’s confirmation is on the horizon and as she is soon to give herself over to the faith and love of God, while at the same time she is starting to experience loss: the loss of a constant father figure as her dad Paul [Thierry Neuvic] has moved out to be with his new lady; physical loss with her grandfather Jean [Michel Galabru] dying ungracefully; and loss of innocence as desires begin to emerge in the form of an admiring choirboy named Pierre [Youen Leboulanger-Gourvil].

The aforementioned themes are a little contrived. There is the local priest, Père [Stefano Cassetti], who appears tormented by his predicament as confessional outlet for Anna’s mum Jeanne [Lio] – an old flame – and Anna herself. Catholic Jeanne is struggling to cope with the termination of her relationship and Anna’s blossoming puberty causes jealousy of her daughter’s youthful beauty as she questions her own ageing body’s attractiveness in light of her husband’s departure into the arms of another woman. Paul, who is not religious, has left Anna and his wife in the family home with his sick father, whose awkward desires are evident as he approaches death with a smile.

So how does young Anna – recently back from boarding school – know where to place her trust and faith, with all these contradicting influences and figure-heads? Things are made all the most puzzling when her friend Pierre steps up his adolescent efforts to win her heart. She is unsurprisingly coy and uncomfortable with the lad’s advances at first, but she quickly becomes aware of her assets and her repellent reaction softens. In one tender scene she admits to him that she undresses with her fellow girl pupils at boarding school and it seems that self-awareness and sexual curiosity has just begun to emanate into her life, just as she is set for religious awakening.

There is an admirable portrayal of unease in self-discovery and the beautifully haunting choir-sung version of Radiohead’s Creep that appears in the film is perfectly apt, but with Love Like Poison clocking in at just over an hour half in length and not quite enough meat to chew on, one feels just a little short-changed.

Love Like Poison is showing at the Rio Cinema until 19 May.