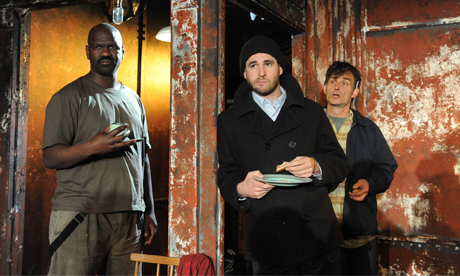 They can be the most difficult of plays to pull off: the lesser-known, neglected works of a well-known acclaimed playwright.  Often slight and vulnerable, these plays are tucked away in a writer’s back catalogue where bigger names steal the stage.

In this vein, the Arcola Theatre’s current David Mamet double bill resurrects Lakeboat and Prairie du Chien: two of the author’s early one-act plays. And it turns out that even before the Pulitzer Prize, before the Tony nominations, before Glengarry Glen Ross, Mamet was pretty good.

Set on a Boston cargo ship, LakeBoat depicts a series of conversations between its crew members where guns, booze, girls and Clint Eastwood are hot topics.  In typical Mamet fashion, we see men talking with other men in a manly way.  Grr.  However, amidst the pontification, one-upmanship and overall rowdiness, appears Dale – the new guy – whose youth and innocence sheds a poignant light on the lives of the crew. 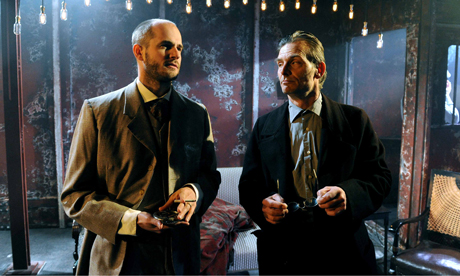 Continuing with the transport theme, Prairie du Chien takes place on the carriage of an overnight train where a passenger tells a strange and haunting story. As this extended monologue is spliced with the action of a card game of mounting tension, it is the unsaid and the unknown that pervades the anonymous characters.

Under Abbey Wright’s skillful direction, a stellar ensemble doubles up for the two performances. Rory Keenan has some of the play’s most misogynistic and crude lines, but his animated delivery is perfectly pitched. Ed Hughes- all het up and testy – displays inspired moments of comic timing involving a megaphone. The RSC veteran Nigel Cooke delivers a flawless performance as the mentally unstable Joe.

All in all, Mamet’s men have got an awful lot to say for themselves. And I think it’s worth a listen.

Lakeboat and Prairie du Chien
Until 7 May 2011