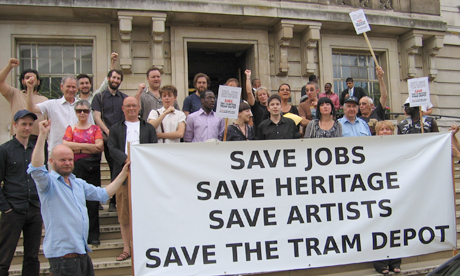 An application to partially demolish Hackney’s historic Clapton Tram Depot was narrowly passed by one vote at a planning committee earlier this month (4 April).

Despite objections from a number of local campaign groups, the council accepted revised plans to develop largely residential buildings of up to seven storeys in its place.

A proposal to convert the tram depot into an arts centre would have preserved the original building’s structure, but the committee overturned this.

Cllr Ian Rathbone, who also chairs Clapton Arts Trust (CAT), said on behalf of Leabridge ward councillors: “The decision taken last night by the planning committee on the slimmest of majorities – one vote – shows how close the argument was to being won.  We hope the developer will take this on board and be willing to work with the local community and the artists working in the depot to preserve it as a cultural hub.

“Objectors were given little time to raise important legal points, particularly on the need for a full survey for bats, job loss incompatible with the Council’s Core Strategy and the impending possible listing of the depot by English Heritage – all of which have been ignored.”

Planning documents show that although a listing application has been made to English Heritage by CAT, the Department of Media, Culture and Sport declined to add the depot to the statutory list in 2005, as it “did not possess any special architectural or historic interest (of national importance).”

The site was locally listed in October 2010, though this provides no statutory protection.

With regards to job losses, the planning committee concluded that the proposal offered a “re-provision of a good level of the employment floorspace currently at the site”.

It also stated: “The applicant has outlined measures and expressed a willingness to re-accommodate current occupiers where possible.”

The council added that the proposal was “likely to lead to an uplift in the level of employment at the site” based on a calculation that 55 people are currently employed.

Previous estimations have suggested the site employs up to 100 people if casual and part time work is also factored in.

But approval of the planning means campaigners are left with few options. Cllr Rathbone opined: “We will be pressing on with our attempts to buy or lease the tram depot as it is and seek its regeneration rather than destruction.”

Fate of Clapton Tram Sheds to be decided