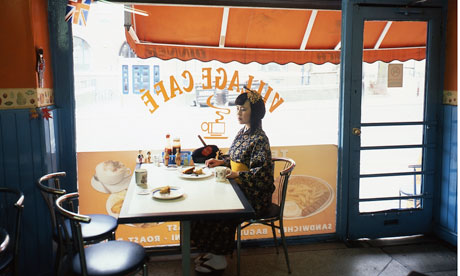 This article titled “Royal Wedding: Tom Hunter: ‘All the other royal marriages have fallen apart now'” was written by Ian Tucker, for The Observer on Saturday 16th April 2011 23.05 UTC

Tom Hunter’s work documents the lives of his friends and fellow residents of Hackney, east London. Borrowing ideas from old masters such as Velázquez and Vermeer, his work lends a dignity to the sometimes prosaic lives of his subjects.

Soon after accepting our brief to produce an artwork commemorating the royal wedding, Hunter was studying coverage of the tsunami and saw the rare TV appearance of the emperor of Japan. He began reading about the Japanese royal family and in particular Princess Toshi, the emperor’s granddaughter, who will be prevented from succeeding to the Chrysanthemum Throne because she’s female.

Coincidentally, Hunter’s friend Kev is married to a Japanese girl, also called Toshi, so he decided to shoot her in a cafe posing as the princess, contemplating her situation and the ephemeral nature of royal weddings. She pokes at the bun on her Fergie and Andrew commemorative plate and studies the Charles and Di mug and the Japanese royal figurines on the table.

“She’s thinking about all the other royal weddings,” says Hunter. “They’ve all fallen apart now.”

← Every parent’s worst nightmare: how ketamine killed our daughterLocal landmark Clapton Tram Depot to be demolished for redevelopment →