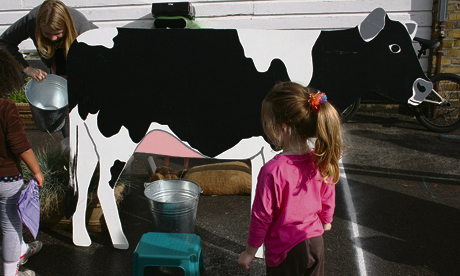 The milking competition starts at 11am on Saturday 9 April. Photo: Growing Communities

On Saturday 9 April, you can take part in a milking competition at Stoke Newington Farmers’ Market to celebrate the arrival of new dairy farmer, Phil Hook, to the market.

The competition will be run by Growing Communities, the group which runs the market. “We want people to come along and have a go at milking Daisy and Dora, our two charming – if a little wooden – Friesians, who will be visiting the market for the day,” said market manager Kerry Rankine.

“The person who milks the most in the shortest time will win some of Hook & Son’s delicious raw cream.”

“We’re delighted to have another organic dairy producer at the market as it’s never been more important to support small milk producers – and to know how your milk is produced.  Although a recent application in Lincolnshire for a giant dairy unit housing over 3,000 cows inside has been turned down, the industrialisation of food production in the UK – in particular dairy and meat – and the loss of small family farms increases every year.

The market is an important outlet for small farms that produce food in a truly sustainable way.  These farms can also make a real contribution to rural economies; Hook & Son’s farm now employs 17 local people in processing, packaging and distributing their dairy products.”

Raw milk contains important enzymes that aid in assimilating the nutrients in milk.

Raw milk is a probiotic food containing beneficial bacteria such as lactobacillus and acidophilus.

Pasteurisation destroys or reduces the levels of vitamins A, C, B12 and B6 and the digestive enzyme required to break down the protein in milk. Raw milk contains higher levels of these vitamins.

Growing Communities is a social enterprise that aims to change the current food system by building community-led alternatives.