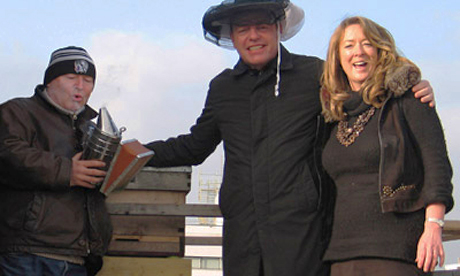 Hackney’s famous music studios, The Premises, has teamed up with the Golden Company to launch a project to encourage more people to learn how to look after bees, especially in urban areas.

Madness frontman Suggs visited the Premises Studios this week in support and visited the bee colony which has been installed on the roof of the iconic recording studio.

London’s bee population is in rapid decline, having decreased by about a half since 2008. The Premises Managing Director, Julia Craik, said: “We established a hive and a colony of bees on the roof here as part of our project to encourage more people in urban areas to look after these gentle but amazingly productive insects.”

With the sunny days arriving, this is the time of the year when bees are starting their annual pollinating job which is essential to Hackney’s vivid flora.

Suggs said: “Beekeeping is a crucial part of looking after our environment so that both the bees and our planet can continue to thrive”.

The Premises Studios opened in 1986 on Hackney Road; since that time it has and has welcomed numerous famous artists including Nina Simone, Patti Smith and the Buena Vista Social Club. It has also launched a number of environmentally-friendly initiatives, including solar panels installed in 2005 to supply energy to one of their studios.