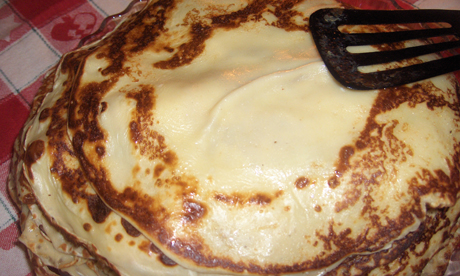 To shrive is to gain absolution for your sins through grovelling penance and the tittle-tattle of confession. When a priest shrives you he listens open-mouthed to what you’ve done, and when you shrive you tell him the lurid details. Guilt and reward, the shifts and cycles of sin and forgiveness, of lean times and fat, are central to the Christian way of thinking. And Shrove Tuesday marks the end of shrovetide, the last fat hurrah before the gloom of Lent with its warnings of the evils of milk. Before then, though, we feast.

The pancake is prehistoric. Grinding boring but nutritious grains into flour, blending them with protein-rich liquids such as milk or eggs and cooking the mixture made for an extremely palatable food, and it seems likely that pancakes were among the first things humans learned to cook. Once you’ve got fire in your caveman arsenal it’s easy to heat a piece of flint or slate to make a basic griddle. The Roman food writer Apicius describes a batter of eggs, milk, water and flour which was fried and served with honey and pepper. It sounds rather good.

Shrove Tuesday is only around 1,000 years old, so people brought pancakes to it rather than the other way round. For once the old wives’ tale is true: the cakes were a useful way to use quick-spoiling foods such as milk and eggs that were forbidden in Lent. The earliest surviving English pancake recipe dates to 1430, but recipes don’t begin in earnest until the 1600s. This may be because the food had only then spread to the educated classes, or perhaps pancakes had only recently returned to general popularity. Either way, by the 18th century milk and occasionally cream had become the main liquids for the batter: before then, brandy and wine had been just as common. In Brittany people often still add beer to crêpe batter, and the drink remains a useful alternative for lactose intolerant pancake-eaters today.

This being a country wedded to quaint eccentricities, a number of traditions have developed around pancake day. In Olney, Bucks, villagers have organised a now famous pancake race almost every year since 1445. Only women compete, wearing “the traditional costume of the housewife, including a skirt, apron and head covering”, and running 415 yards (380m) while flipping their pancakes to the peal of the shriving bells. The winner used to receive a prayer book but in these pinched and godless days the prize is a kiss from the verger. The largest pancake ever flipped was made in Rochdale in 1995. It measured 15m across and weighed three tons. Aldo Zilli is also a prize tosser, having flipped a pancake 117 times in a single minute in 2009 in a successful assault on the world record.

The crêpe is probably the archetypal pancake; thin, wheat-based versions are by far the most common around the world. Eastern Europeans and Scandinavians have developed an extraordinary fondness for jam- and cream-filled crêpes, and many Swedes eat them every Thursday after the traditional pea soup. In Galicia, crêpes are called filloas and are made with pig’s blood instead of milk, which turns them the colour of black pudding. I love Ethiopian injera for its doughty determination to stretch the gastronomic limits of the crêpe: the food becomes an enormous and soggily impractical plate.

The world is awash with pancakes, from the bao bing, those limp dry discs used for Peking duck, to bulging tortillas, pooris, boxties, latkes and blintzes. A breakfast of American pancakes, maple syrup, blueberries, bacon and fierce black coffee is about as fine a start to the day as I can think of, and it would be a fine thing if British high streets could welcome the American pancake chains as wholeheartedly as they’ve embraced their burger joints. I also have a special fondness for drop scones, those Scottish pancakes so delicious at teatime with butter and syrup. What kind of pancakes will you be enjoying, and what’s your favourite topping?