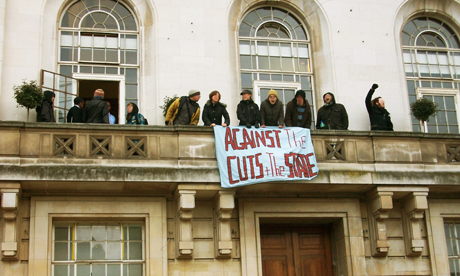 The protestors staged a brief demonstration and unfurled a banner from the first floor above the main entrance to the building before leaving of their own accord following discussions with security staff.

The main council building on Mare Street was for a time  closed to visitors following the incident.

The budget meeting on Wednesday night was the site of angry confrontation between protestors and councillors, as mutual criticisms flew both in the chamber and in the ether (via Twitter).

The protestors were demanding that Hackney Council refuse to incorporate central government funding cuts into their budget (a budget which largely makes up for the cuts by drawing on the council’s reserves and by increasing revenue through rent and charge hikes).

However, Mayor Jule Pipe and Labour councillors argued that passing a balanced budget was the right thing to do.