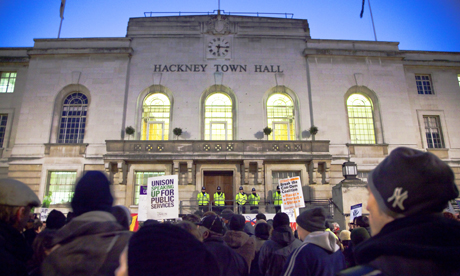 Hundreds of protestors gathered outside the Town Hall yesterday evening as Hackney Council passed a controversial budget that critics say will hit many of the borough’s most economically vulnerable residents hard. The budget was passed amid vocal protests by several dozen demonstrators from the public gallery during the vote.

Whilst council tax is to be frozen for the 2011/12 year, council tenants will see inflation-busting rent increases of 6.1 per cent, and leaseholders face a rise of an average of 5.1 per cent in the fees they pay.

The increases are part of a budget that assimilates £32.57 million of cuts to the money Hackney Council receives from central government. With less money coming from Whitehall, the council had a choice between increasing the income it can generate itself, cutting services or spending part of its reserves.

The budget adopted at Wednesday’s meeting incorporates all three measures, drawing heavily on the council’s reserves in order to continue to fund most of what it calls ‘frontline services’, such as street cleaning and libraries.

Areas where spending will be reduced are mainly those associated with the council’s internal management. These reductions will result in what is described in the budget document as “a programme of significant staff reductions”, and which has been projected by unions to be up to 800 jobs over the next four years.

In addition to increases in council rents, a range of other charges will also rise, including those for hall hire and visitor parking.

The budget foresees steady or increased spending in some areas, including an investment in fly posting and graffiti removal (£541,000 – up from £527,000 last year). The council plans to employ four additional graffiti teams “to be maintained for 4 years up to and including the 2012 Olympics.”

This decision proved contentious; both opposition parties on the council (the Conservatives and the Liberal Democrats) made proposals to reduce this element of the budget – the Conservatives as part of a plan to reduce council tax, and the Liberal Democrats as part of a package of cuts that would enable the council to compensate for the loss to Hackney students of the Education Maintenance Allowance (EMA). The latter proposal was dubbed by mayor Jules Pipe “worse than robbing Peter to pay Paul”, in view of the fact that the EMA had been abolished by a coalition government of which the Liberal Democrats are part. Both the opposition budget proposals were defeated.

A number of protesters in the public gallery interrupted the mayor’s speech chanting,“Shame on you for turning blue” and “No way, no cuts”. The meeting was adjourned for approximately 20 minutes at one point when the chants became too loud, before resuming with intermittent heckling. Cllr Luke Akehurst was a particular target of the public’s anger, being greeted with chants of “twit, twit, twit!”

Mayor Pipe was also interrupted a number of times in his closing statement, charged by the hecklers with cowardice. The mayor claimed that failure to pass a legal, balanced budget would result in “immediate service collapse” and the council would be “using the most vulnerable people this borough as a political weapon”. This speech won Mr Pipe a standing ovation by the Labour members of the council, who duly voted the budget through.

Prior to the meeting there had been expectations that up to six of the councillors on the Labour benches would vote against the budget, but in the event party discipline reigned and the Labour councillors voted in unison to more cries of “Shame on you!” from the public gallery.