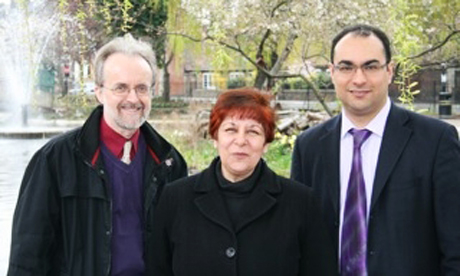 Ian Rathbone, Linda Kelly and Deniz Oguzkanli are three of the six councillors calling on the council to reject a 'cuts budget'

Six Labour councillors have issued a statement calling on Hackney Council to refuse the cuts billed for today’s meeting, at which the budget will be set for the coming year. In a message on the Hackney Alliance website they said they would “support a campaign to defeat the policies of this government through public protest, opposition and defiance.”

They called for a London-wide strategy, where councils would lead “the charge… refusing to adopt cuts budgets as a result of government-enforced policies and producing a Needs Budgets to show what should be funded.”

The councillors claim that the government funding to Hackney Council will be cut by £44m for next year alone, with proposed cuts to legal aid and welfare placing an additional strain on one of the capital’s most deprived boroughs. While councillors have condemned the cuts, there has so far been no definitive move to a position of non-compliance in Hackney, which has a large majority of Labour councillors on the council.

A ‘needs budget’ would echo the stand taken by Liverpool Labour councillors, who in 1984 passed an illegal budget in defiance of the Thatcher government’s cuts to local government.

Other councillors appear to be more cautious, whilst all are likely to be aware that if the council does not pass a legal budget, the process would be taken over by a Section 151 officer. (The Section 151 officer is usually the local authority’s treasurer who has a number of statutory duties, including the duty to report any unlawful financial activity involving the authority, or failure to set or keep to a balanced budget.)

The concern might be that if this were to happen it would result in even harsher cuts than those Labour councillors plan to pass.

This is clearly not a position favoured by Cllrs Barry Buitekant, Michelle Gregory, Linda Kelly, Deniz Oguzkanli, Ian Rathbone and Patrick Vernon. However, they argue that the “disproportionate” impacts of the cuts on Hackney’s residents means “if we do not speak out, our silence will be taken for agreement”.

The meeting is to be held at Hackney Town Hall at 7pm this evening, Wednesday 2 March.