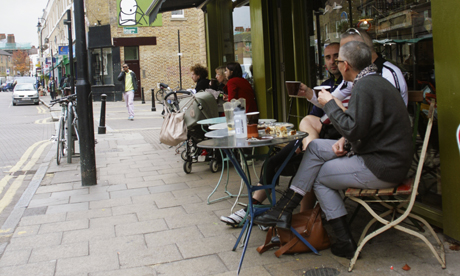 The charges affect all businesses using street space to trade

Shopkeepers and restauranteurs across the borough are up in arms over being charged by Hackney Council for trading outside their own shops and cafés.

The issue has arisen as the council is about to change the charging structure from a flat rate to a charge per square metre. Traders claim that this will mean increased charges are up to 240%. The maximum fee proposed is £940 per annum.

Critics say the charges will mean that fewer traders will provide chairs and tables outside their premises, stifling the borough’s nascent café culture.

A number of Broadway Market businesses do not believe they should be paying the shop front trading licence fee at all. They say that they own the land in front of their properties and argue that it is their right to put tables and chairs outside their premises should they wish – without having to pay the council for doing so.

Some traders have told the Citizen that the cellars under their properties stretch out under the pavement, which they say makes the land above theirs by right.

Elsewhere, Venetia Strangwayes-Booth, owner of Venetia’s Coffee Shop on Chatsworth Road, Lower Clapton, was told in 2008 that she had to pay the licence fee. However, Chatsworth Road Traders’ and Residents’ Association took up the matter with the council, and won the point on behalf of all the businesses on the street. Her business and others were then exempted from the charge.

“Everyone on Chatsworth Road received a notice by the council that we had to start paying the shop front trading fee, completely out of the blue, and we were only given a week in which to do it.

“We rejected the council’s demand. Having just set up the Chatsworth Road Traders’ and Residents’ Association, we told all the traders not to pay the fee and wrote a letter to the council saying that the area of land between the front of the pavement and our shops belonged to us, and it always had been like that.

“We had plenty of people from the street who said it had been like that for at least forty years.

“The council were not at all sympathetic at first. They just wrote back with a load of legal terminology. They were formal notices so they were quite threatening.There are a lot of people here who don’t speak English as a first language who were quite frightened of the bureaucracy.

“The council then went away to look at the Land Registry records and then came back and said that we were right.They had initially told us we were wrong and eventually apologised to us for putting us under so much pressure.

“The fee increase is shocking. I think that is now more than many people’s business rates.

“I believe very firmly in the power of large groups of people. The more people that make a fuss, the more likely that something will be done.”

Meanwhile, a number of businesses in Broadway Market are getting together to fight the fee increase, which they say is detrimental to local business. They have compared notes to fight the increases, and found several inconsistencies: for example, that even with proof of cellars, most are paying the shop front trading fees, whilst at least five retailers are not.

“When we put tables and chairs out it is better for the appearance of Broadway Market, it stops it from looking like any other street. It’s the restaurants and pubs on this street that make Broadway Market what it is.

“We have refused to renew our licence because the increased fee is going to be around a 250% increase on the amount we were paying previously. And so now we no longer put tables and chairs out.

“Now that I know that there are Hackney businesses that are not paying it makes it more ridiculous. It was only recently that we found out that having our cellar meant that we might not have to pay either.

“The only thing I want to say is that Hackney Council should be working with us, not against us. They can’t stop people sitting on the pavement or sitting somewhere in front of the restaurant. We are just providing visitors with a much nicer environment.

“I’ve been here all my life, I was born here and my grandfather owned the shop originally, opening it in 1900. We have a cellar under the shop, which stretches out underneath the pavement.

“We put plastic tables and chairs outside the shop a while ago so people could enjoy some pie and mash if it was a nice day. After a while I got a letter from the council saying that if I did not remove the tables and chairs I would be fined a thousand pounds. I decided to leave them out. Eventually I got another more threatening letter from the council, so I was forced to remove them and I haven’t put them out again since.

“I would want to put them out there again, but I’m not going to pay for it. I don’t want a load – just a table and a few chairs so that people can enjoy the sunshine. I’ve never had any problem with the council before. A thousand pounds is a lot of money to me and my business. I just thought I was doing the customers a favour, giving them a place where they can sit outside.”

According to the council’s current shop front trading licence charges, the fee varies between £6 and £7.50 per week, depending on what is sold.

Under the proposed new price structure, as detailed in the council’s consultation announcement in the council’s freesheet Hackney Today (p.14, issue 233, 7 June 2010), traders will be charged 70 pence per square metre per day.

When asked about the increased charges, a council spokesperson said that the intention is to rearrange fee structure to cover administrative costs only and bring fees in line with other London boroughs. The council stated that more than half of businesses, particularly small businesses, could see their fees reduced, and that it expects only larger pubs and restaurants – if using maximum space, seven days a week, all year round – to see an increase.

The Citizen has calculated that for a trader to see a reduction in fees, they would have to be using less than two square metres of pavement space.

The council has confirmed that the ownership of both the area of pavement and the underground cellar depends on the information held by the Land Registry for each building and, as a result varies from one property to another. In cases where ownership of the area is in doubt, market inspectors are required to carry out a Land Registry search in order to establish ownership.

However, traders argue there is little point in the council searching the Land Registry when proof that cellars exist can resolved by the request of a simple visit. Many of those concerned traders, whose cellars still exist but have been bricked up to keep the dampness out, may also consult with the investigation carried out by the Traders Association.

Broadway Market traders are hoping their investigation into inconsistencies in charging, and their claim to the disputed land in front of their properties will force the council to rethink before the end of the consultation period on 4 March.