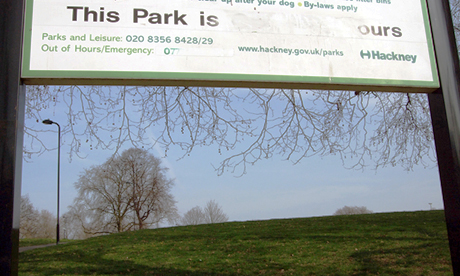 Hackney Downs: this park is ours. Photo: Russell Higgs

They hang the man and flog the woman,
That steal the goose from off the common,
But let the greater villain loose,
That steals the common from the goose.

Following the heart-wrenching destruction of so much precious local green space caused by the building of the Olympic site, is it any wonder that many local people are feeling extremely sensitive when yet another cherished piece of local land is perceived to be under threat?

It is a mystery why Stormont House School, situated on the edge of Hackney Downs, was ever given permission to be built on common land in the first place. But now that it subsequently needs to be rebuilt, and following its recent proposal of a land swap onto an area further into the Downs, local citizens are wondering why instead it doesn’t do a land swap onto a brownfield site and return our common land to us in its entirety?

This is by no means meant as an attack on Stormont House School itself. There can be no doubt that we all want the best possible future for the school. But there comes a point when we have to draw a line in the sand and say enough is enough.

What follows is an attempt to put into words why some of us are so passionate in our defence of what remains of the great outdoors.

There are things in the world that should never be anyone’s private property. Some things exist to be shared, used and enjoyed by everyone, and such a right of open access needs to be protected for future generations.

All land in England is “owned” by someone and usually the owner will claim to have exclusivity. Even common land has an owner, though everyone has an interest and a stake in common land and the owner’s rights are restricted.

Common land is open public space that has survived from pre-mediaeval times, pre-dating the monarchy or Parliament. It comes from a time when land was entirely without ownership, when it was wild and free. This ancient legacy is one of the many reasons why it is so precious to us and why so many people are devoted to its protection and continued survival. And as the Open Spaces Society highlights, often what is valued about common land will be intangible, but such values are just as important as those which are measurable.

The Royal Commission on Common Land, 1958, said, “We have come to the conclusion that, as the last reserve of uncommitted land in England and Wales, common land ought to be preserved in the public interest.” And their report made three important recommendations: all commons should be recorded on registers, be open to the public as of right, and be properly managed.

It is impossible to think of common land without also thinking about the whole history of enclosure (or inclosure as it was known). Of which George Orwell (1903-1950) had this to say: “Stop to consider how the so-called owners of the land got hold of it. They simply seized it by force, afterwards hiring lawyers to provide them with title-deeds. In the case of the enclosure of the common lands, which was going on from about 1600 to 1850, the land-grabbers did not even have the excuse of being foreign conquerors; they were quite frankly taking the heritage of their own countrymen, upon no sort of pretext except that they had the power to do so.”

Inevitably our thoughts then lead towards the current problems of enforced privatisation that we face today in all our cities and towns. The gradual silent theft of our public spaces. This creeping privatisation of our streets, squares and green spaces is indeed a contemporary form of enclosure. More and more we find ourselves having to traverse private spaces which have the superficial appearance of being public. Social environments where citizens are in fact placed in a position of subordination, with restricted rights. Where public assembly, protest, or loitering is prohibited.

In Reclaiming the Commons, David Bollier says:”In virtually every case, the market price for a resource does not begin to capture its actual value to the larger community. But generally we have no rigorous way to speak about such shared assets, or about the costs of enclosing them.”

Thomas Paine (1737-1809), in his pamphlet Agrarian Justice published in 1795, proposed that private land owners should pay compensation to every citizen. Paine wasn’t opposed to private property, but he recognised that the basic needs of all humanity must be provided for by those with property, because they have originally taken that land from all of us. Paine’s suggestion was a payment to all the non-property holders (aged 21 upwards) given by those who do own property in order to compensate for their right to such private ownership. A precursor of the contemporary concept of a Citizen’s Income, a basic non-withdrawable income payable to all as a right of citizenship. See also Land Value Tax.

“The politics of land — who owns it, who controls it and who has access to it — is more important than ever, ” says The Land Magazine, which promotes the belief that the roots of justice, freedom, social security & democracy lie not so much in access to money, or to the ballot box, as in access to land and its resources.

Ultimately there is a deep truth that needs to be acknowledged, and it is this: all the land, water and air of this planet is in reality the common property of all living things. The proper stewardship of these spaces and resources requires our combined common sense.

Hackney Downs school plan in question after backlash from residents