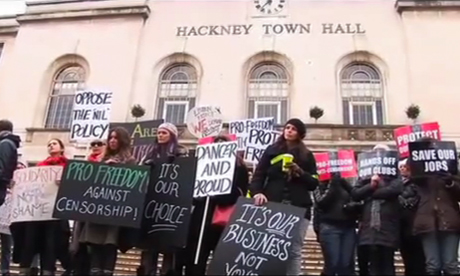 No more strip clubs or sex shops will be allowed to open in Hackney following yesterday evening’s decision by the council to ban such businesses from opening in the borough.

The four strip clubs and one sex shop that currently exist will be able to continuing trading, subject to conditions.

There are no lapdancing clubs in Hackney, and under the new policy none will be able to open. No existing or new massage parlours, saunas and businesses operating under such euphemisms will be affected.

The policy was presented by the vice-chair of the council’s licensing committee, Cllr Brian Bell, as the chair, Cllr Chris Kennedy had given his apologies and was absent from the meeting.

All but two councillors at the meeting voted for an amended version of the original ‘nil’ licensing policy on sex entertainment establishments. Those who voted against were Cllrs Geoff Taylor and Angus Mulready-Jones.

More than two thirds of respondents to the council’s own consultation were against the ‘nil’ policy.

Speaking before the vote and against the nil policy, Cllr Taylor said: “When this policy came to the licensing committee I characterised it as a policy of nil by stealth.

“I stand by that and I don’t see that the amendments that are being proposed change that in any way.

“Of course we need to be careful about where sex establishments are sited and of course residential areas need to be avoided.

“But this policy is not about where sex establsihements are sited or not sited.

“It remains, quite simply a nil policy and I still don’t believe a nil policy will promote either the freedom or safety of women.

“One of the main reasons Paul Turp, the vicar of Shoreditch Church, is against the nil policy is that he actually has experience of dealing with women who were caught up in this business before it was regulated, and therefore before women were protected by the licensing regime.

“Without vast resources to police a nil policy – and as we have already heard vast resources are not available – there is every risk that a nil policy will simply drive the business back underground. Whenever policy makers attempt to ban consenting adults from exercising and enjoying their sexuality as they please behind closed doors, they end up looking foolish.

“Which is very much not to say that we shouldn’t try to control the unwanted effects of those activities. That is what a licensing regime  attempts to do. Crime and disorder, including the abuse of women, are real measurable evils, Madam Speaker. And it is notable that the police did not give their support to the nil policy.

“We must I think assume therefore that the take the view that a nil policy would not on balance assist them in their struggle against crime and disorder.

“When the nil policy was consulted on, [we had] one of the largest responses to a consultation that Hackney has ever had, [and the majority] were overwhelmingly against the idea, as Cllr Kennedy, chair of the licensing committee has said.

“We asked, do you think sex establishments are out of keeping with Hackney?, and roughly speaking, the residents came back and said no, we don’t think they are out of keeping. But a consultation is not a referednum and numbers aren’t the only thing that matter.

“People who were opposed to the nil policy explained their position very persuasively both in terms of philosophy and practicality and it was notable that opposition to the nil policy was considerably greater than average in Haggerston, the only ward that has experience of sex establishments.

“Incidentally one of the consultation respondents said she was pretty sure the consultation would make no difference to the outcome because she thought the council had already made up its mind.

“It’s not often that constituents write to me about policy votes, but I recently received a letter on this subject from a woman who works in the area in a strip bar.

“She said the girls who work in this strip bar were told that some of the councillors thought the what the girls did was degrading to women.

“The girls in fact laugh at this and would love the councillors to come and talk to them personally.

“If this was one of the reasons the policy was brought in, it is both wrong and not thought through.

“In a political system that relies on parties it is a very serious matter both personally and politically to disobey one’s political whip and no one should do so except for the most pressing reasons.

“In considering my vote tonight I am remembering first that the nil policy was not in the manifesto for which I stood eight months ago, and second I am remembering the discussion that took place in my party group at the vote at the end of that discussion.

“In voting tonight I hope that members will not be swayed by any personal distaste or disgust they may feel about sex establishments. We are here to make decisions in the public interest bearing in mind the way the real world is, not as we would wish it to be.”

Whilst Cllr Taylor mentioned that the police did not support the ‘nil’ policy, Hackney trades unions opposed the policy outright.

The only businesses which will be able to trade are those that are considered by the council to be ‘well-run, longstanding’ establishments, all of which happen to be in Haggerston ward: Ye Olde Axe, Browns, Rainbow Sports Bar, The White Horse, and the sex shop Expectations.

Commenting on the council’s new policy, OBJECT, an organisation which campaigns against ‘sex object culture’ said: “We are pleased the council has set a cap on the number of lap dancing clubs and that they have taken seriously the views of the hundreds of women who voted and say they feel unsafe and uncomfortable outside the clubs. We urged them to set a nil limit.

“These clubs are not harmless as they like to claim. We have hundreds of women who wrote to us and the council saying they felt unsafe outside them, and take the long way home to avoid them. The responses we have had from women reinforced the idea that the council should do something about them.”

In an independent report released last month, Dr Brooke Magnanti refuted the widely-reported belief that rapes in Camden increased as a result of lap dancing clubs.

The original claims, by Lilith R&D/Eaves, were published in 2003 and have been used as evidence to restrict adult entertainment licenses in the UK and elsewhere.

Using newly available statistics, Dr Magnanti compared police reports of rape with other boroughs in London and found its occurrence since 1999 to be lower than boroughs with fewer or no such cubs such as Islington and Lambeth. “It is because rape is such a serious crime that researchers must be at least as rigorous in their analysis as they would with other serious life events,”  said Dr Magnanti, better known as author and former call girl Belle de Jour.

“The calculations demonstrate that the original claim made in the Lilith report, that the number of reported rapes is rising due to lap dancing clubs, is not true,” said Dr Magnanti.

In the decade from 1999 to 2008, the incidence of rape decreased dramatically in London, bringing the numbers for Camden in line with national averages for England and Wales. “The original report claimed that Camden’s rapes were 3 times the national average, but that is not true at any point.”

Dr Magnanti says she hopes the improvement in statistics will refocus anti-rape campaigns towards looking for the true causes of violent crime against women.

“The causes of rape and violent crime are not well understood. But research from all over the world shows there is no connection between adult entertainment and increases in assault and rape,” she said. “We need to start thinking about alternative ways to address this crime, and focus attention on better methods of investigation and prosecution.”