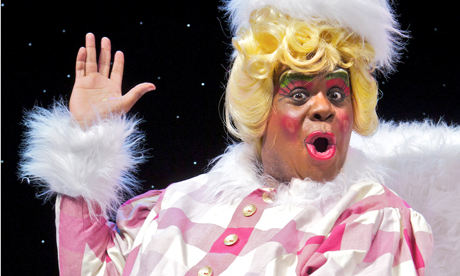 Clive Rowe as Dame Trot in Jack and the Beanstalk

Hackney will be upholding the British pantomime tradition once again this Christmas at the Empire, with family favourite Jack and the Beanstalk.

British actor Clive Rowe of Tracy Beaker fame is to reprise his role as the Dame, his ninth appearance in the role. Jack will be played by Avenue Q star Jaygann Ayeh whilst Chloe Taylor from West End show Wicked will appear as Off-Her-Trolley Molly.

It has been a challenging year for the Empire, which closed after last year’s Christmas show, Aladdin, due to financial problems. Built over a century ago as a music hall, the venue reopened over the summer as part of the East End festival of international music.

The Empire looks set to return to its full former glory with this year’s pantomime, which features talking harps, golden hens and break-dancing cows.

The festive rendition of Jack and the Beanstalk, branded ‘the perfect antidote to the government’s spending review’, opens on the 2 December, with previews from 27 November.

More information from the Hackney Empire.