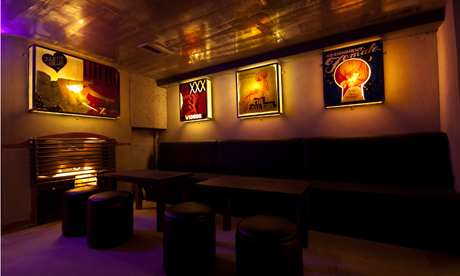 A peek inside the Nest

Following months of planning and preparation, Dalston’s newest night spot opened its doors on Thursday 14 October. A select crowd of press and industry types were invited to the basement venue to see Kid Who, Miles Proby, Harry James and a live PA from Ali Love.

The Nest is owned by the Colombo Group who, as the brainchild of Fabric co-founder Steve Ball, know a thing or two about successful venues. They’ll need to – occupying the site of iconic club Barden’s Boudoir, The Nest has a rather large space to fill in Dalston’s night time landscape. So far, though, the signs are good.

The nightspot has retained the shape of the former basement rock joint; the interior design is slicker and smoother, but arguably more sterile than before. This effect is offset by a smattering of salacious neon signs and nude posters that lend the place a smutty glamour, but fans of Barden’s may feel something has been lost from the sweat-dripping-off-the-walls mayhem of yore.

That said, the new set-up gives more than a passing nod to its Hackney location – the management has promised to focus on upcoming acts rather than headliners, leading to a reasonable door charge.

Although live acts are very much part of the music policy, The Nest has more of a club feel than its predecessor. Rachel Barton, DJ and promoter of the night Lively at the Nest, said: “I think it’s a good place to have a drink in, then go raving in afterwards. It also has air-conditioning unlike most clubs in Dalston.”

Dalston is now firmly on the radar of places to got out for clubbers from all over the capital, so it’s perhaps inevitable that it will lose some of its appeal as the masses descend. For now though, The Nest is the first of its type, bridging a gap between basement raves and more up-market establishments. In the words of a taxi driver outside: “It’s not like ten years ago. Dalston is changing.”

More information about the Nest.