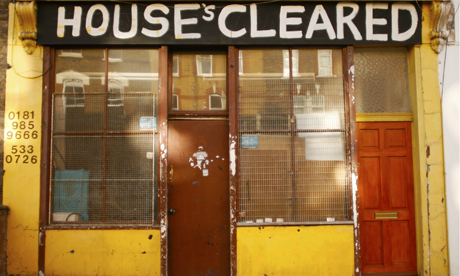 This article titled “Why I like the subsidised neighbours” was written by Angela Phillips, for guardian.co.uk on Monday 1st November 2010 09.31 UTC

As a hard-working Londoner, I have always been delighted that housing subsidies ensured I didn’t have to live next door to people like George Osborne and David Cameron. In Hackney’s Victorian terraces I have shared pavement space and school-gate waits with people who I would never otherwise have met. I don’t understand the assumption made by the coalition government that I should resent the fact that my neighbours are subsidised to live next door to me.

Why should I resent the Campbell family filling every nook and cranny of a house that, from the outside at least, was identical to the one I was buying (half of)? A Caribbean Catholic family with 10 children is just the kind Jeremy Hunt had in his sights when he said that the state shouldn’t subsidise large families. There is little chance that they will survive the housing cull we will shortly be witnessing.

I also can’t understand why I should feel any animosity towards my current neighbours, a retired couple who, just like me, are still occupying the family home after their children have flown. But their house is owned by the council, so they may well have to move when the new rules come in, whereas I, because I own my own home, have no such pressure to relocate.

I am being exhorted to feel angry that hard-working breadwinners are forced to commute long distances while “poor people” get to live in inner London on the back of the taxpayer. The idea that anyone can just walk into a house and demand that the council pay the tab is a fantasy. Most of the “poor people” living in inner-London areas like Hackney and Tower Hamlets are there because these used to be rundown, poor neighbourhoods where the hard-pressed working poor could afford to live in council-owned or cheaply rented accommodation. Now they are being told that they must shove over and make way for the next wave of gentrifiers because, given the speed at which rents are rising, it is costing taxpayers too much to subsidise them.

But while it is true that housing subsidy has risen faster than the public purse can sustain, it is certainly not the fault of the poor. It is not the poor who benefit either. They get no richer: their circumstances have changed not one iota. All that public money is going straight into the pocket of landlords, many of whom have owned their property for many years and just see their income rising steadily as rents rise. But where is the demand to bring back rent control? Why are we not hearing people shouting about the public subsidy of rich landlords living in the most salubrious parts of London while pocketing rents paid by the taxpayer for overcrowded, often badly maintained properties?

Housing benefit was a bribe, dreamed up by the Thatcher administration to soften the blow of selling off council houses. Don’t worry, they said, it will be even better than before. The poor will be able to move out of the council-house ghettos and live among us richer folk – and we will help them to do it. In the 1970s council housing made up one-third of all housing. During the Thatcher era over 50% of it was disposed of at well below market rates. But do we hear people shouting: “We were robbed”?

No. Now an even more rightwing government is withdrawing that bribe and leaving working-class Londoners to fight among themselves, cheered on by a tabloid press. The tabloids would far rather have them turn on each other (roll up and watch the “deserving” fighting the “undeserving” poor) than on the government which has robbed them of the housing that used to be theirs by right. Housing that was paid for by you and me, and then sold out from under us.

The London I love is not made up of manicured streets and gated communities. It is a wonderful jumble of black and white, rich and poor – beautifully tended front gardens next to discarded mattresses. I like hearing Russian and Arabic on the bus and I want to share my streets with the likes of the Campbells. I think good communities are mixed communities, and I don’t mind paying for that.