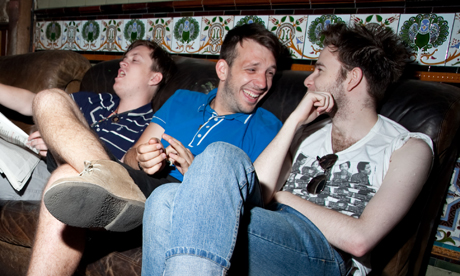 When first purchased by current owners Mark Shaffer and Mark Robinson, the Macbeth was probably best known for the odd celebrity skirmish. But, over the last three and a half years, it has steadily gained a reputation as one of Hackney’s finest music spots. Situated a stone’s throw from Kingsland Road, this slightly weathered-looking boozer hosts a healthy mixture of live music and DJs throughout the week, with past guests such as Annie Mac, Franz Ferdinand, Florence and the Machine and DJ Zinc all having graced the diminutive stage.

As with other venues of its type, the decor is more Queen Vic than Ibiza – somewhat incongruous given the progressive music policy, although the upstairs chill-out area has recently had a comic book-style makeover from local artist Mike Ballard.

The formula behind the Macbeth’s success? “Don’t book crap bands,” says co-owner and events manager Mark Robinson, who also does bookings for nearby Scrutton Street Studios. “No one wants to have a shit party. The idea was to have a traditional pub, but cater for the new people who came to the area. All the promoters make a huge effort – we make sure they do, we see it as a joint venture really. The standard has been so high for the last couple of years that they all know they have to live up to it.”

And live up to it they do – the 300 capacity venue is often full to the brim, never more so than on Jaymo and Andy George’s Moda Nights, which saw punters queuing right down Falkirk Street. “The planets just aligned for that one,” says Robinson, “they could have filled Fabric with some of those line ups. Those nights aren’t your bread and butter though; they’re like Tutankhamen’s treasure, one day you wake up and say: ‘where’s my treasure gone?”.

Despite those nights moving on to pastures new, things look good for the Macbeth. Mixmag have recently inquired about hosting an event, barbecues on the outdoor smoking terrace have been popular all summer and established favourites Eclectic Like Whoopi and Urban Nerds House Party are still going strong. Future events include a film night showcasing underground British cinema starting in the autumn and unashamed party night Cherry Cola – the future is bright for Hoxton’s most-leaked best-kept secret.

← ZicomoHow cricket is bouncing back →