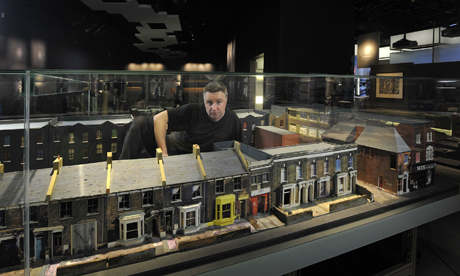 Tom Hunter and 'The Ghetto'

Sometimes art can do more than simply please the eye and titillate our aesthetic tastes Sometimes it has a purpose, a practical function, and – as in artist Tom Hunter’s case – it can speak out for a whole community whose lifestyle choices were threatened and deemed replaceable with a frozen chicken warehouse.

‘The Ghetto’, a remarkably accurate miniature sculpture of the rows of houses on Ellingfort Road where Hunter squatted as a student has been restored and permanently put back on display in the Museum of London, where it cosily sits behind a brand-new £40,000 case.

Made from cardboard, paper, wood and photographs, Hunter only ever intended it to survive a week-long degree show, and earn him his bachelors from the London College of Printing, before it would be dumped in a skip. He never anticipated that this would be one of life’s “transformational moments”.

The story behind ‘The Ghetto’ goes like this: London Fields in the early 1990s was a hub for Hackney’s squatters, housing not just the anticipated crowd of artists and students, but also doctors, architects and lawyers, and attracting diverse range of nationalities and cultures.

On Ellingfort Road there were communal gardens, cafés, bars and cinemas. “It wasn’t an isolated little pocket, it was the centre of a very big squatting community within Hackney,” says Hunter. “The shops and pubs all wanted us there because we generated a place that was otherwise threatened to become derelict.”

However, the homes that Hunter describes as “a great place to live” – in 25 years, he has never moved further than 100 yards away – were viewed by Hackney Council as an anti-social statement, while the Hackney Gazette reported someone describing the area as “a crime-ridden, derelict ghetto, a cancer – a blot on the landscape”.

In 1994, the squatters were threatened with eviction as the council, whose policy towards the community was one of total disregard, planned to demolish the houses to make space for a large-scale industrial zone, frozen chicken warehouse included.

“The propaganda that was put out was completely counter to the reality. It was a great community were people looked out for each other. There was very little crime,” says Hunter. This is where inspiration behind the sculpture emanated from, as Hunter set out to create a work that would exhibit to a wider audience how the squatting community really lived.

How, then, did a cardboard sculpture, still being constructed with masking tape by Hunter and model maker and friend James McKinnon the evening before being put on display, manage to speak out for Hackney’s squatters and ultimately save their homes? Hunter pays tribute to his “amazing” university tutor, Julien Rodriguez who firmly believed that a wide audience would appreciate the work and arranged people from the Museum of London, the Guardian and Time Out to attend the showcase.

“Hackney Council’s policy before [the sculpture] made the magazines was, ‘We do not speak to squatters, you are scum, we will not negotiate with you’. But after the pieces were published, suddenly there were people in the council who were willing to speak to us, so we could actually talk of a way to save and regenerate the area,” says Hunter. “It was a very poignant moment for me when I realised that the work could actually have a practical purpose in society, and that is the thing that has inspired me ever since.”

This, Hunter admits, was the fun part. What followed was ten years of hard work: getting ordered and transforming from fringe community into an organized cooperative, working through another housing association who bought the properties from the council and rebuilding and renovating many of the homes. Still today, rent from these residences goes towards repaying the money borrowed.

When walking down Ellingfort Road nowadays, Hunter admits that the spirit has changed; people have left and luxury apartments have been developed. However, Hunter often returns to relive that feeling of communal spirit with many of his friends who still live in their old houses, having transformed their squats from focal points for Cool Britannia’s party culture into family homes, something that would never have been possible had they not fought against the council’s policies.

But history often repeats itself. Today, the corner of London Lane and Mentmore Terrace has been bought by a property developer that wants to put up a 24-storey tower block that would dominate the vicinity, while locals have voiced their outrage at the proposal. “It’s interesting because now people are thinking, ‘Right, we have to fight this in order to preserve our area,’” says Hunter. “It never ends, which I suppose is the story of London.”

The Ghetto is part of the Galleries of Modern London project, which opened at the Museum of London last month.

← Spare a thought for fantastic Mr FoxCrunching the stats: what the budget means for Hackney residents →