Hackney’s re-elected MPs have joined voters in voicing their fury over the events of election night, when many people were unable to vote.

As television viewers across the UK were regaled with footage of angry would-be voters who had been prevented from exercising their franchise in the elections on Thursday 6 May, serious problems were beginning to surface in the count taking place in Hackney Town Hall in the early hours of Friday 7 May, suggesting that insufficient resources had been devoted to the elections.

When the polls closed at 10.00pm and several hundred people were still waiting to vote, fury erupted across the borough: in one instance, would-be voters at Triangle Road polling station in London Fields who staged a sit-in in protest at being disenfranchised.

Diane Abbott and Meg Hillier, who were standing for re-election to parliament (and were successful), were so outraged that they filed official complaints against the poor conduct of the elections in the borough and called for an official enquiry.

Meg Hillier went on national television to describe the way elections were organised in the borough as “an embarrassment”.

Hillier, speaking on BBC 2’s Newsnight, said the Council ought to have been able to plan the process better: “it’s actually possible to work out the number of people who are supposed to be voting and how long it takes to deal with each one, and make sure the resources are in place to deal with that.”

Similarly, Matt Sellwood, the Green party candidate for Hackney North and Stoke Newington, claims that his party identified lack of capacity on the morning of polling day and informed the Council that polling stations were inadequately staffed, but that nothing was done to address the problem.

“The Green party raised concerns with the Returning Officer about the long queues at Clissold Leisure Centre, and we were assured that the issue would be looked into before the evening rush.

“It was obvious to anyone present at the polling station during the period before work that there would be serious delays in the evening.”

The Electoral Commission has since begun collecting complaints from voters with a formal investigation promised.

Commission Chair Jenny Watson admitted the day after the election that the UK electoral system “has been at breaking point for some time and [..] last night it broke”. Archaic law and underfunding of elections by local councils have been blamed for the fiasco.

A Hackney Council spokesperson said, “In the past elections in Hackney have always run very smoothly and we apologise unreservedly to the very few voters who found themselves unable to vote”.

The Council claimed that only 270 people in the borough had been denied the right to vote. But a voter called Wayne told the Citizen: “There are far more that 270 unable to vote. While standing in the queue to vote, I saw many simply giving up at the Comet Nursery after an hour of waiting. I myself almost gave up and my two flatmates were unable to vote at all. I suggest the 270 merely were the ones turned away only.”

Another local resident, Fiona, had other problems: “I was not allowed to vote today because Hackney Council gave me the wrong information on the telephone.

“My postal vote papers did not arrive but they gave me the address of my local polling station and told me it would be ok to just turn up and vote anyway. I was turned away by staff there who seemed very concerned that they had also turned away several other people for the same reason – misinformation from Hackney Council. What a waste of votes!”

Polly Lane, the Green party candidate for Hackney South and Shoreditch, said: “Anecdotally, […] I overheard some ladies chatting at the town hall who had been stationed at a polling station the previous day.  One was telling the other that she had been turning away people all day who did not have their polling cards with them, because she couldn’t find them on the electors’ list.

“It was only towards the end of the day that she realised that the house numbers were listed in odds, then evens, and not in strict number order.  And the people she had turned away had been on the list the whole time.

“Her gripe was only that no-one had informed her that that was how the electors’ addresses were listed (not that it was a gross misapplication of democracy, then). Much to be learned from this election by Hackney Council, I think.”

The problems did not stop with voting; the count too was fraught with difficulties. Hackney Council had announced on their website that the declaration of the results for parliamentary candidates was to be expected between 2.00am and 6.00am on Friday 7 May.

But as the dawn turned to midday and the result had yet to be announced, tempers began again to flair.

The results were finally announced in the mid-afternoon, with Council staff putting the delay down to a lengthy ballot ‘verification’ process.

A council spokesperson said, “We have an unusually high number of postal votes in Hackney, which is due largely to the fact that votes cast in the 2002 election were only through postal voting (there were no polling booths). To ensure the integrity of Hackney’s results we verify and check the signatures on all of our postal votes, unlike many other London borough who just do a sample check on 20% of their votes.”

“We are running three elections here in Hackney and we expect our counters to have counted in excess of 275,000 ballot papers by the end of the day.”

It is unclear, however, why the count took 12 hours longer than anticipated, when the total number of postal vote applications was known in advance, and turnout was only 13.4 per cent higher than in the last general election in 2005 in Hackney North, and 6.1 per cent higher in Hackney South.

In addition to the length of time taken to count ballots, concerns were raised about the integrity of the counting process. When the ballots of Hackney South and Shoreditch were finally totalled, there was a lack of transparency noted by several of those present.

In the words of Dave Raval, Liberal Democrat candidate for Hackney South, “[Council staff] bundled the votes, using paper clips and rubber bands, into quantities of 25 and 100 for each party. This was […] done faultlessly in my opinion.

“However, these bundles were then taken by senior staff at the council over to a corner of a cramped room, away from anyone else being able to clearly see them. There is thus no way that I, or any politician, could see what happened to these bundles.

“We were then told what the final numbers were. Both my bundles and the Conservative bundles were put in boxes, out of view, whilst the Labour votes were laid out on the table. Senior council staff then told us that the Lib Dem vote was 9600 and the Tory was 5800. (Strange how these were very round numbers! […]).

“There is no way we could see this, nor inspect the bundles to make sure that it was accurate. Since we had all been up for all of Thursday and most of Friday, since the council had not even started to count the local election results […] and since we had seen the individual votes being counted and knew that Labour had won and the Lib Dems had come second, our party decided not to ask for a bundle check.

“However, there is no way that we can know whether the ‘9600’ was the right number or not. In Hackney North, for example, where the bundles were laid out for all to see, the Lib Dems got a higher vote”. [link: ]

This account of events is supported by the Green party candidate for Hackney South and Shoreditch, Polly Lane: “I was at the Hackney South count with Dave [Raval].

“I agree with him that the counting seemed to be done well (despite a significant amount of mine going into Meg’s [Meg Hillier, Labour party] pile – hopefully shifted back in time though), but once the bundles were made, they were taken out of sight and beyond any further scrutiny.”

According to electoral law, candidates and their agents are entitled to observe the count in its entirety.

When asked whether the electoral process had been adequately financed, the Council declined to comment. 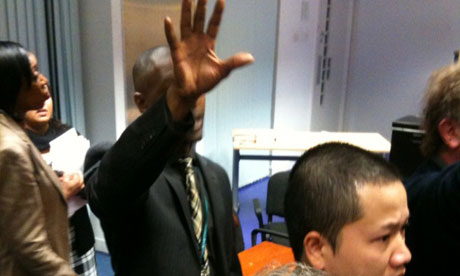 ← Hackney Elections 2010: How was it for you?Hackney Citizen launches fighting fund for legal battle with Council →